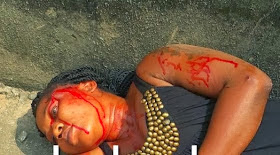 I'm beginning to think that this beautiful actress, Yetunde Akilapa, has some serious spiritual problem:

She was caught earlier in 2013 with about 100 master keys trying to steal valuables in her compound in Lagos in a very controversial matter, but she was later released. Just this week, the same actress has been again in the

act in the Magodo area of Lagos.

On the morning of Sunday January 12, 2014, there was a loud noise around No 15 Ibitayo street, in Magodo Phase 2, Lagos, as people were shouting ''thief thief''! and running after a lady in black dress…

The lady, without shoes, tried running inside a walled estate. Unfortunately for her, before she could get to the gate, the security on duty mobilised and caught her.

She was escorted back to number 15 Ibitayo street where she had earlier been caught inside one of the master bedroom with a bunch of master keys hidden in her brassiere.

Actress Yetunde Akilapa was beaten mercilessly before she was later handed over to the police.

Iyanya speaks on why Nigerian entertainers are forced to live large