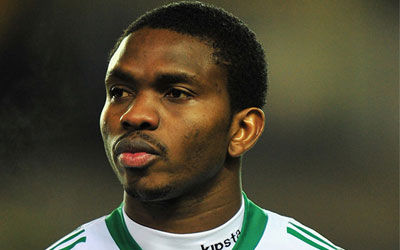 Estrange captain of the Super Eagles, Joseph Yobo has disclosed that he has moved on from the disappointment of being dropped from the list of players to the 2014 World Cup qualifiers and the FIFA Confederations Cup.Yobo sparked a furore when he asked the Stephen Keshi and his assistants of disrespect by leaving him out of the squad without a word of explanation despite being in form and leading the team to the last Nations Cup in South Africa.

“Whatever happened has happened and that’s behind me now. When I look at the whole season, I’m very grateful to God. Because this could have been my worst season,” Yobo who won the Turkish Cup last weekend with Fenerbahce.“I’m not disappointed about being left out. I’m very happy and supportive for those who have been called in to the team.“It’s their time. They should take, it they should enjoy it. I’ll definitely be watching and I’ll give them my support. I’ll speak to some of the players and encourage them.“I was a Super Eagles fan before I became a Super Eagles player and I will remain a fan after I stop playing, so I will always support the team whether I am there or not.“I sustained a very nasty injury and wasn’t even sure I would make it to the Nations Cup. I had already ruled myself out of the tournament, but God saw me through and I came back early and made it.“Then I won the Nations Cup and now won the Turkish Cup, then got to the semi-final of the Europa League, something that was a bit of history because it was the first time for the club to get to that level.

Lekki Shootings: We are ready to show footage – LCC