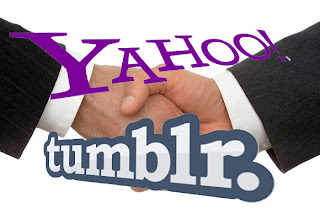 Yahoo! CEO Marissa Mayer’s bold move to buy online blogging forum Tumblr for $1.1 billion was announced on Monday as she tries to rejuvenate an Internet icon that had fallen behind the times.

The deal is Yahoo!’s most expensive acquisition since the California company bought online search engine Overture a decade ago for $1.3 billion in cash and stock.

Yahoo’!s board of directors agreed on Sunday to buy the wildly popular blogging platform from the 26-year-old founder David Karp.

The deal for Tumblr, which boasts 100million users and 90million posts per day, was struck for $1.1billion cash.

The deal makes Karp, a native New Yorker, the latest 20-something tech tycoon, even though he was publicly opposed, even just last year, to selling the company he founded out of his mother’s small Manhattan apartment in 2007.

On Monday morning, Mayer publicly announced the purchase of Tumblr with a post on her own Tumblr page – including an animated GIF image that acknowledged the public questions about the acquisition.

Her first words about the deal were: ‘We promise not to screw it up.’

Mayer announced that Karp will stay on as CEO of Tumblr and continue to run and develop the site.

Despite a massive user base, Tumblr’s revenue was only $13million last year. Even that figure was only made possible after $125million in capital investments.

The deal also faced almost immediate backlash from Tumblr users, who feared Yahoo!’s ownership would change the character of the site and water down the features that make it successful.

Mayer sought to allay concerns on both sides – and even used an internet meme to make light of the criticism. The GIF she posted reads: ‘Yahoo. Tumblr. Now Panic and Freak Out.’

Instead, Mayer urged users and Yahoo! investors alike the ‘Keep Calm and Carry On’ – a reference to a famous British propaganda poster produced during World War II.

Tech news site AllThingsD reports that Mayer, who took over as Yahoo! CEO in July, wanted to quickly snatch up Tumbler as ‘the stake in the ground of what her strategy is going forward for Yahoo!.’

Tumblr, which is a mico-blogging platform for quickly posting pictures, text and video, also functions as a social media site.