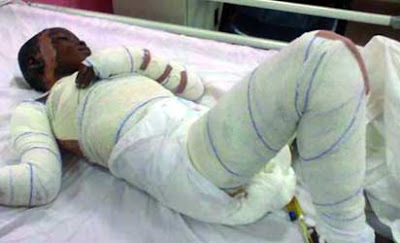 Doctors at the General Hospital, Gbagada, Lagos, southwest Nigeria, are seriously battling to save the life of an 11-year old girl, Ita Bassey-Eno, who was allegedly set ablaze by the woman she lives with, Mrs Nkese Iroakazi, a nurse at a hospital in Surulere.
Iroakazi was alleged to have poured kerosene on Bassey-Eno before lighting a match stick to set her ablaze after the girl was said to have stolen a piece of meat from the pot.Witnesses said the girl ran out of their apartment at  7, Adeniran Ogunsanya Street, Surulere, unto to the main road with fire all over her body as she cried for help from passers-by to rescue her.It was gathered that someone quickly stopped his vehicle and used his fire extinguisher to put out the flame on her body.

The incident, which occurred last Saturday, was immediately reported at the Bode Thomas Police Station and the police from the station arrested Mrs. Nkese.The little girl was rushed to the Burns and Trauma Centre, an annex of the Lagos State University Teaching Hospital at the General Hospital, Gbagada, for urgent attention as the doctors in the hospital said she had suffered 95 percent burns and would take a miracle for her to survive.Bassey-Eno’s private part was damaged, while almost all her body is burnt. The whole of her body, except her face and her feet, are bandaged, while she wears pampers because her private part was damaged.On her hospital bed on Monday when NE visited, the little was groaning in pains while health officials described Nkese as callous woman and that she must be made to face the music.Executive Director, Esther Child Rights Foundation, ECRF, Mrs. Esther Ogwu, who was at the hospital to see the girl, wept when she saw her pathetic state, saying that in all her life as human rights activist, she had never come across such a gruesome case as that of  the little girl.According to Ogwu, “the situation is terrible. The doctor said the girl suffered 95 percent burns and that her private part has been damaged. This woman is more than wicked. Justice must take its course.“One of the health officials at the General Hospital, Gbagada called me and said a woman poured kerosene on the little girl staying with her and lit up a match stick and set her ablaze. The girl ran out of the house to the main road where a Good Samaritan used her car fire extinguisher to put out the fire.”Little Bassey-Eno, who hails from Akwa Ibom State, southsouth Nigeria, was brought from the village with another girl, Happiness Okon-Bassey, 13, to live with Nkese in June 2013 on the premose that she would send them to school, but that was not to be as the two girls allegedly performed the function of domestic servants for Nkese.The second house girl, Okon-Bassey, said she did not see when her colleague was set ablaze but that she heard her screaming when their mistress was beating her shortly before the she saw flame all over her body when she ran outside their home.She alleged that they were maltreated and beaten thoroughly very often and that they had no time to rest as they work almost throughout the day for their mistress without going to school, saying that they normally eat twice daily.Daughter of the alleged culprit, Ijeoma Akiti, 27, said she was not at home when the incident occurred and that she could not tell whether her mother poured kerosene on the little girl’s body and set her ablaze, but that she heard such story at the police station.She said her mother was first married to her father and later remarried into the family of Iroakazi and that her mother’s husband had gone on a business trip to the eastern part of Nigeria.At the Bode Thomas Police Station, police sources alleged that the little girl confessed that her mistress poured kerosene on her. The police at the station said the woman would be transferred to the State Criminal Investigation Department, SCID, Panti for further investigation into the matter, but Ogwu alleged that the police were trying to shield the woman from prosecution.In her statement at the police station, Iroakazi denied that she poured kerosene on the little girl’s body and set her ablaze.According to her, she was in the sitting room when she heard a loud cry and rushed out only to see the girl on fire and called on people to help put out the fire.Officials of the Lagos State Ministry of Women Affairs and Poverty Alleviation, WAPA, were at the hospital and the police station where they spoke with the woman, but she denied the story.WAPA officials took Okon-Bassey, the second girl with them for rehabilitation pending when she would be reconciled with her real mother.