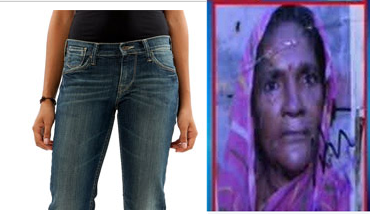 In a very conservative town in India, a mother has been killed for permitting her daughter to wear jeans.

55-year-old Kamlesh Dubey was dragged out of her home and beaten to death by a mob after an argument with her neighbour who objected to daughter Gunjan wearing jeans instead of traditional sari.

The argument escalated and even Gunjan, 20, and her father Netrapal were wounded in the fight that broke out in the city of Aligarh in Uttar Pradesh, the IBI Times reports.
Senior superintendent of police in Aligarh, Amit Pathak told The Times that: “The girl’s neighbour would constantly pass comments on the way the girl dressed.”
“On this occasion she was in jeans and the woman, as usual, started passing comments. A fight ensued which grew ugly when the neighbour got other men to support her.”
According to reports, Police superintendent Dayanand Mishra has said that a manhunt is now on to track down the other people involved in Dubey’s death
The Huffington Post reports:

The neighbour, named only as Phulwati, and her aide Ravindra Singh have been arrested, India Today reports.
Netrapal said: “My daughter is an undergraduate student and she feels comfortable in jeans. Other girls of her college also wear jeans.
“But Phulwati asked me to prevent her wearing jeans. She said her own sons stare at her because of her jeans. She also told me that other people in the area would start Eve-teasing my daughter if I didn’t stop her.”
Eve-teasing is a euphemism for sexual molestation in India.

MY BOOBS ARE 100% REAL,HAVE YOU TOUCHED IT BEFORE?- BBA STAR KAREN IGHO

MY BOOBS ARE 100% REAL,HAVE YOU TOUCHED IT BEFORE?- BBA STAR KAREN IGHO

Meet Yankee Based Gospel Act, Olori Jesu, Who Is Taking After Mama Bola Aare In Music