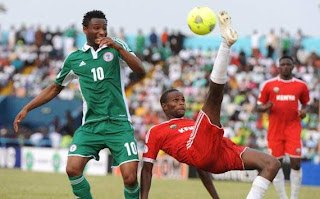 The drumbeats of war roared louder in Nairobi on Monday, with Kenya’s Commissioner for Sports, Gordon Oluoch stating emphatically that the Harambee Stars would defeat the Super Eagles 1-0 in Wednesday’s 2014 World Cup qualifier at the Moi International Sports Centre, Kasarani.
Oluoch, who works with Sports Minister, Dr. Hassan Wario, said at a public function that he had no doubt the Stars, who earned a 1-1 draw against the Africa champions in Calabar on March 23, would triumph.
Publicity for Wednesday’s game has been at a premium in the East African nation, even as most analysts believe their team has its work cut out trying to stop the Super Eagles.
However, aside the fact that history is heavily skewed against them, the Harambee Stars would definitely struggle against Nigeria on Wednesday.
They miss four of their top guns, including goalkeeper Arnold Origi, and reserve goalkeeper Duncan Ochieng has not inspired confidence since the team started camping in Naivasha and moved to Nairobi on Sunday.

Glee’ Star Charice Pempengco Comes Out As A Lesbian