US places $23m reward for Boko Haram leader, Shekau, 4 others 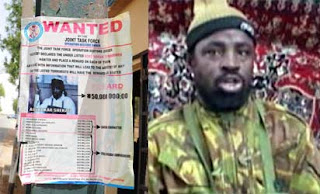 The US today Monday June 3rd posted up to $23 million in rewards to help track down five leaders of militant groups accused of spreading terror in west Africa.The highest reward of $7 million is offered for the Boko Haram leader Abubakar Shekau, who last week called on Islamists in Afghanistan, Pakistan and Iraq to join the bloody fight to create an Islamic state in Nigeria.The US State Department’s Rewards for Justice program also targeted Al-Qaeda in the Islamic Maghreb (AQIM), offering its first ever bounties for wanted militants in west Africa.Up to $5 million was posted for Al-Qaeda veteran Mokhtar Belmokhtar, the one-eyed Islamist behind the devastating attack on an Algerian gas plant in January in which 37 foreigners, including three Americans, were killed.A further $5 million was offered for top AQIM leader Yahya Abou Al-Hammam, reportedly involved in the 2010 murder of an elderly French hostage in Niger. Malik Abou Abdelkarim, a senior fighter with AQIM, and Oumar Ould Hamaha, the spokesman for Mali’s Movement for Oneness and Jihad in West Africa (MUJAO), were also targeted by the rewards program, which will give up to $3 million each for information leading to their arrests.

Lekki Shootings: We are ready to show footage – LCC