US actress Annabella Sciorra has testified in Harvey Weinstein’s trial that the film producer pinioned and r.a.p.e.d her at her home 25 years ago.

Ms Sciorra, best known for her role in The Sopranos, said Mr Weinstein forced himself into her apartment and attacked her.

“I was trying to get him off me,” Ms Sciorra said to the New York jury. “I was punching him, kicking him.”

The 67-year-old denies all charges, which include r.a.p.e and sexual assault. 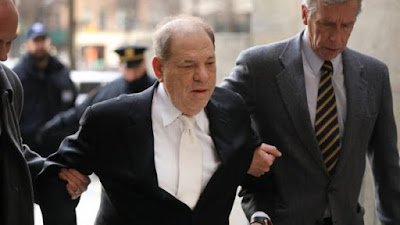 If convicted, he could face life behind bars.

The incident that Ms Sciorra alleges would have happened too long ago to be pursued under New York law.

But prosecutors intend to use her testimony to support their argument that the accused is a s3xual predator.

To do so, they must prove Mr Weinstein committed a serious s3xual offence against at least two people.

Mr Weinstein is charged with r3ping one woman, Jessica Mann, in a hotel room in the New York borough in 2013, and performing a forcible sex act on a second woman, Mimi Haleyi, in 2006.

His defence team said his actions were consensual, including one “loving” relationship.

« S.e.x is for straight married couples only – Church of England
Mayorkun – Geng »