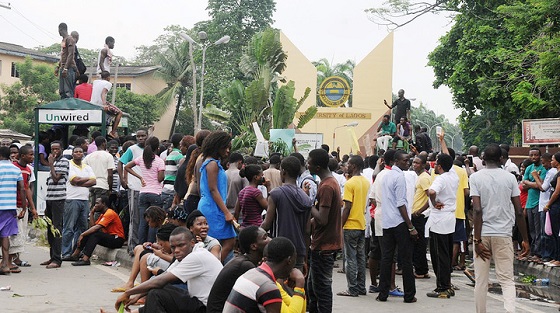 Students of the University of Lagos are protesting the high cost of living on campus. It’s gathered that the peaceful protest started yesterday, as the students bemoaned the high cost of food and other basic items on campus, saying it is disheartening that students are paying higher for food and other consumables than their prices outside campus. The cost of making photocopies is also said to be too expensive for an academic environment.
According to a citizen reporter who seeks anonymity,”Imagine, we students  are buying sachet water at N10 per sachet, Indomie super pack sold for N60 in town is N70 here, same as Indomie hungry man size, which is N100 everywhere except in my school where it goes for N110. Also soft drinks in plastic bottles such as Viju,Fanta,Pepsi are sold for N120 per bottle instead of its supposed retail price of N100.

World’s most expensive motor home goes on sale for £2million

World's most expensive motor home goes on sale for £2million

#BBNaija: Hilarious reactions as Twitter users react to Lucy and Nengi’s fight after the eviction show

BBNaija: ‘Losing Me Will Be Your Worst Mistake’ – Ozo Tells Dorathy

Edo 2020: Steps on how to check election results in real time on INEC portal