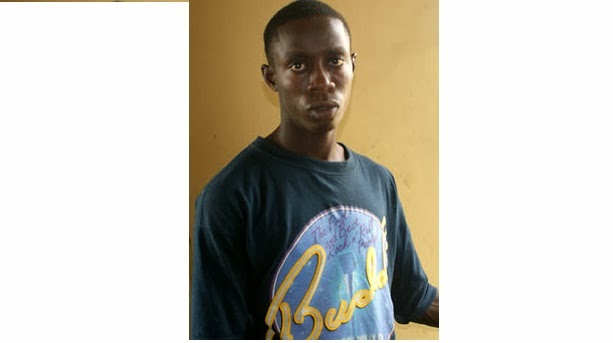 The police in Lagos State, yesterday, said they have arrested an 18-year-old boy, Ikechukwu Friday, who allegedly killed a 12-year-old girl for money ritual.

The suspect, who is currently being interrogated at the State Criminal Investigation Department, SCID, Panti, Yaba, was paraded before newsmen.

According to him, a pastor he asked for money instructed him to kill a young girl and obtain her faeces.

He said the pastor promised him N100,000 if he was able to accomplish the task.

According to him, “I attend a popular church around Ketu Street, Aguda but I live with my parents in Badagry. I just finished secondary school and I have been very broke so I approached the pastor for money but he told me that I should strangulate a little girl.

“He said when strangulating the girl, she would pass out faeces. The pastor said I should obtain the faeces and bring it to him. He said if I could do this, he would give me N100,000.

“So, on December 30, 2013, I approached a young girl, Bose Ogoja. Her mother sells food in Badagry and I usually patronise them, so she trusted me. I told the girl that I wanted to show her something and that she should follow me. So I took her to an abandoned NITEL building and locked the door.

“I pressed her neck tightly and she passed out faeces. I was, however, not able to get the faeces because I was caught before I could escape.”

The suspect, an indigene of Onitsha, Anambra State, pleaded for mercy, adding that this was his first crime.

State Police Public Relations Officer, Ngozi Braide, said the boy was arrested by neighbours in the area and handed over to the Badagry Police Division.

Braide said the pastor, who allegedly gave the boy the instruction, had been arrested and was already cooperating with the police.

While displaying the gruesome picture of the slain girl, Braide said: “He was arrested in an uncompleted building. The security guard manning the building told the police that he saw the boy entering the building with the girl.

“He said a few minutes later, he heard the girl screaming and later saw the boy leaving. The security guard raised the alarm and the neighbours were alerted and they arrested the boy.”

On entering the building, the discovered that the girl was dead.

“The picture of the girl’s corpse shows that the girl was naked and defecated on the floor.”

Meantime, the police also arrested a 39-year-old, Michael Udom, for allegedly stealing a vehicle belonging to the company he worked for.

According to the police, the suspect attempted to sell the vehicle for N250,000 in the Ijora Badia area of the state but was arrested before he could do so.

The suspect, however, denied the allegation, saying he took permission from his boss before taking the bus home with him.

He said, “I work with a courier company. After the close of work on December 25, 2013, I told my manager that I wanted to use the vehicle to pack things from my house and he agreed. Shortly after parking the vehicle, someone called me from my house saying he wanted to buy the vehicle.

“I refused and told them that I could not sell the vehicle without the company’s consent. However, I did not know a policeman was there. He also posed as a buyer and arrested me.”

Nigezie And Other VMN Channels Rebrands

Enjoy The Best Deal this Ramadan With Adron Homes