So My Passenger’s D!ck Appointment Is My Man – Uber Female Driver Laments | Must Read

A lady who drives for Uber, @Msixelaa, reportedly got into a conversation with her passenger. Midway through their journey, her passenger revealed she was going to see her boyfriend she hasn’t seen for like forever, which she (Uber driver) could relate to because her man just left. 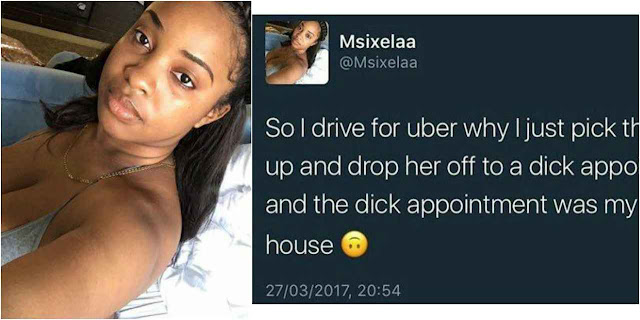 However, the lady got the shocker of her life, when they pulled up at her man’s house, and it turned out that her passenger’s dick appointment was her man. She also alleged that before she left the house in the morning, her man told her he was going to see his mum in hospital.

Here are text messages between her and her man after the incident;

« VIDEO: Skales Ft Tekno – Give Me Love
2 Chainz Says His Nicki Minaj Collab Is “Goin’ To Be A Problem” »