Sex scandal update! Stephanie Otobo reveals how her mum was arrested and forced to apologize to Apostle Suleman 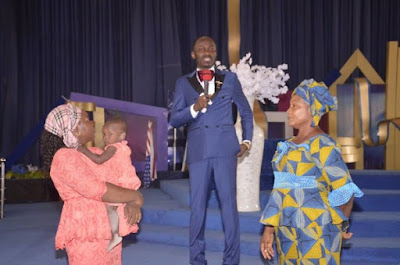 Stephanie Otobo, the accuser of the founder and General Overseer of Omega Fire Ministry, Apostle Johnson Suleman, has claimed that her mother was threatened to speak against her.

Recall that Mrs Otobo Tope had told reporters that her daughter was not normal alleges after‎ she accused Apostle Suleman of running amorous affair with her, getting her pregnant and promised to marry her.

Stephanie made several claims including that the clergyman gave her a concoction that terminated the pregnancy and nearly got her killed in the process.
Following her mother’s confession, Stephanie, who arrived Canada at the weekend claimed her mother had been arrested twice and was forced to say what she told the public.
She said, “Hi everyone I just landed in the airport now in Toronto.
“I’m still on my way home. I’m on a taxi.

“And I heard my mother made a video or a statement so I called her and she told me she was threatened.
“That she has been arrested two times and they threatened her.
This is what Apostle Suleman is doing, using his power. He should come to court.
“I will make a better video next time but i just want Nigerians to.know my mother was arrested.
“I want them to know my mother’s life is in danger right now because this man is threatening my life.
“He is threatening my family. Why? If he was pure why is he doing this?”

Check out this hilarious conversation between a Nigerian couple… LMAO!

Coronavirus is noise from hell, it is mere fever – Oyedepo

BBNaija: Erica And Kiddwaya Caught Knacking Under The Duvet (Video)

Kaisha’s father is a KING, she has no inferiority complex – Lady says

BBNaija: Checkout 1st video of Lilo after eviction from the house