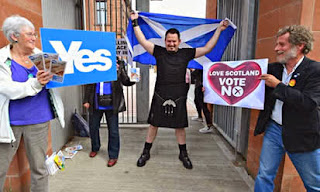 Scotland rejected independence on Friday in a referendum that left the centuries-old United Kingdom intact but paved the way for a major transfer of powers away from London. Despite a surge in nationalist support in the final fortnight of the campaign, the “No” secured 55.30 percent of the vote against 44.70 percent for the pro-independence “Yes” camp. After a campaign that fired up separatist movements around the world, turnout was 84.6 percent, officials said — the highest ever for an election in Britain. “No” campaigners across Scotland cheered and hugged as the results came in and British Prime Minister David Cameron said he was “delighted”, adding: “It would have broken my heart to see our United Kingdom come to an end.” Many “Yes” activists watched dejected and in tears, although First Minister Alex Salmond urged them take heart from the huge numbers — 1.6 million — who backed independence. “I don’t think any of us, whenever we entered politics, would have thought such a thing to be either credible or possible,” the Scottish National Party (SNP) leader told cheering supporters in Edinburgh. The result reassured those worried about the economic risks of a break-up. The pound rose against the dollar and the euro on the currency markets, and the London stock market rallied sharply in opening trade. The CBI business lobby group said the result would be greeted by a “collective sigh of relief across the business community”. The president of the European Parliament, Martin Schultz, was the first to react abroad, saying he was “relieved” and adding: “I like a United Kingdom in a united Europe.”

VIDEO: AKA – Cross My Heart