Rotimi Amaechi, the Director-General of the Buhari Presidential Campaign Organisation, has been caught on tape allegedly criticising President Muhammadu Buhari.

The audio clip, which is less than 10 seconds, was posted on Twitter by Reno Omokiri, a former aide to ex-President Goodluck Jonathan.

The context in which Amaechi made the statement was unknown. The person who the minister was talking to is also not stated.

However, Omokri, who is a staunch critic of the Buhari government, said he had evidence to show that the audio was genuine.

He threatened to release more audio clips in the event that Amaechi denies the authenticity of the clip.

Omokri wrote, “We have more of the secretly recorded audios of Chibuike Amaechi, DG of the Muhammadu Buhari campaign, saying terrible things about Buhari’s government. I hear Amaechi wants to lie that he was referring to Goodluck Jonathan.

“Let him do that and I will release part two which clearly shows he referred to Buhari.” 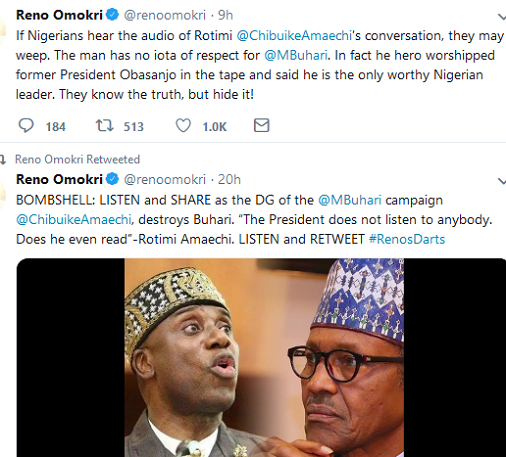 BOMBSHELL: LISTEN and SHARE as the DG of the @MBuhari campaign @ChibuikeAmaechi, destroys Buhari. “The President does not listen to anybody. Does he even read”-Rotimi Amaechi. LISTEN and RETWEET #RenosDarts pic.twitter.com/3VKFzr8LPC

Amaechi created problems for me in South-East – Buhari

How presidency reacted to ‘leaked’ audio of Amaechi criticizing Buhari