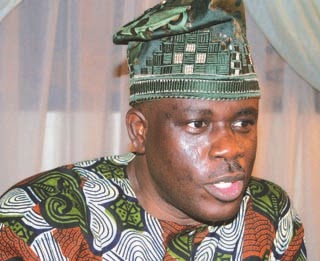 Another report from SaharaReporters

Contrary to earlier denials, embattled ministerial nominee, Musiliu Obanikoro, has confessed to several Senators in Abuja that he did participate in an election-eve meeting in Ekiti in June 2014 in which a group of politicians and government ministers met with a Nigerian army general to rig the governorship election in favor of Ayodele Fayose, the candidate of the People’s Democratic Party (PDP).

The meeting, which is now known as “Ekitigate”, was secretly taped by an army captain who was subsequently forced to flee for his life.
Despite the scandal, President Jonathan went ahead to nominate Obanikoro into his cabinet for the second time, and the nominee is lobbying the Senators to give him a pass during his upcoming nomination hearing.  It is in the process that he has confessed to some of them that he was indeed present at the rigging meeting in Akure, on behalf of the President, to ensure that everything went smoothly.

Obanikoro’s story is that he was simply making “peace” between the army and Ayo Fayose at the meeting, claiming that he was not party to any conversation about rigging.  On the contrary, Obanikoro, who was at the time junior Minister for Defence, is overheard clearly on the tape bragging about the authority granted him by President Jonathan.

Prior to admitting his involvement to the Senators, the former minister met with President Jonathan to discuss the tape and his role. A presidency source said Obanikoro told President Jonathan he was present at the meeting but that a part of the audio-recording was “doctored”.

They said President Jonathan had called him to the meeting to discuss how to mitigate the damage created by the leaked tape.  He told the Senators categorically that it was Jonathan himself who had sent him to Ekiti to help Fayose win the election.  On the tape, Obanikoro says, at least twice, that he is on a “mission” for the President.

He also reportedly told President Jonathan at their meeting that he had asked his US-based lawyers to do a separate voice analysis of the tape and that the lawyers came back with “proof” that certain aspects of the tape had been doctored by SaharaReporters to make the regime look bad.  Counting on that assurance, President Jonathan told a team of reporters from the Wall Street Journal during an interview that the tapes were not real and that he would not investigate the incident.

Following that meeting, the former Minister began a series of legal threats last week claiming to have sued SaharaReporters, as well as The Punch newspaper and Premium Times, both in Lagos.  Up until now, those newspapers are yet to be served copies of the lawsuit.

On Tuesday night, Obanikoro, who is also a US citizen, assured some of the Senators that his US lawyers had already filed the libel suit against SaharaReporters in New York.

On Wednesday, Obanikoro deployed a small rented a crowd of protesters to hold placards in front of the National Assembly to denounce the All Progressives Congress.

It is to be noted that two other key participants at the meeting, Police Minister Jelili Adesiyan and Ayo Fayose, the beneficiary of the Ekiti governorship rigging, have admitted that they were at the meeting that was taped by the army captain.
For Obanikoro’s role in the rigging of the election, APC has advocated his being banned from holding any publicoffice, and asked the Senate not to confirm him.  Mr. Jonathan is known to have re-nominated Obanikoro as his prize for stepping down from the PDP governorship race in Lagos.