Prince Harry can marry Meghan Markle if he likes despite her being black, a divorcee and 3 years older

Prince Harry and his actress girlfriend Meghan Markle have certainly got tongues wagging. Holding hands in the Caribbean sunshine at the wedding of his best Tom Inskip, they looked every inch a couple, a picture of happiness.

Now that the stunning actress, who stars in US television drama Suits, is being heavily tipped as the next royal bride. 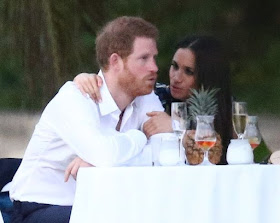 But some killjoys are already trying to find fault in the match.
Ironically Jamaica, where Harry introduced his girl to his ‘crew’, is where Meghan wed her first husband movie producer Trevor Engelson. The marriage lasted two years.
Some suggest her status as a divorcee, her black ancestry and even her chosen profession make her unsuitable. Utter nonsense. 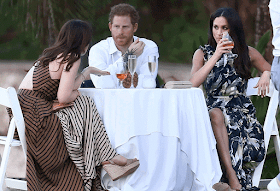 Others harp back to the Abdication of 1936 when King Edward VIII was barred from marrying Wallis Simpson and keeping the Crown, saying that Harry and Meghan’s path to marriage would be blocked.

Again, utter nonsense. Times, thankfully, have moved on. So have the Queen and the Royal Family.
Our next King and Queen Consort, Prince Charles and Camilla, after all, are both divorcees (not to mention the Duke of York and Princess Royal). So too are millions of the subjects they will serve.
There is no doubt Harry is one of the most popular members of the Royal Family.

His charm, warmth, courage, humour and abilities – like his late mother Diana, Princess of Wales – appeals across the spectrum of class and country.

Most people just want that little boy – now a man – to find happiness. He has had his issues with drugs and rebellion. But he overcame them.

He has served his Queen and Country as a soldier with distinction and won the respect of his peers.
In love, Harry now 32 – one of the world’s most eligible bachelors – has enjoyed a couple of long term relationships – with Zimbabwean heiress Chelsy Davy and dancer/actress Cressida Bonas.
Both relationships fizzled out. Harry felt they weren’t helped by paparazzi intrusion.
His relationship with Meghan seems different, stronger, more to withstand such understandable media interest.

Meghan too seems more robust and capable of dealing with media attention. Her media profile is strong too. She writes, she promotes herself online as well as acts.

The fact that Harry seems more relaxed to be seen out with his girlfriend and that she is happy to stay at his London home Nottingham Cottage, Kensington Palace for weeks on end, shows this is his most significant relationship to date.

Many remember the lost, heart broken little boy holding his father’s hand as he walked behind his mother’s coffin too to her funeral service at Westminster Abbey.

Meghan has met many members of his family too.
Harry, in interviews, has made no secret that when he meets the right woman he would love to settle down and have children.
He seems smitten with Meghan and she with him. He is fantastic when he interact with kids, he has a natural empathy with them.
As Meghan is 35, she and Harry know the clock is ticking if they want to start a family. Now, in the sunshine of Montego Bay they have socialised openly as a couple.
Make no mistake this is a very significant step up in their relationship. They are now odds on to marry.
The bookies are even taking bets on their future titles – with the Duke and Duchess of Clarence or Sussex favourites.
If they do marry, I think a carbon copy of his father’s wedding to Camilla would be the obvious template.
It would be tricky for them to have a Westminster Abbey blessing – because it would have to be preceded by a civil service marriage elsewhere.

A blessing at St George’s Chapel, Windsor (with the castle walls) – with a marriage ceremony at Windsor Guildhall – would be easier to manage and wouldn’t detract from the pomp and splendour the occasion.
While the monarch probably could not attend the couple’s civil ceremony, just as was the case with Charles and Camilla, the Queen and Prince Philip could attend the blessing and hold a reception for them at Windsor Castle.
Constitutionally, the Royal Marriage Act 1772, gives the monarch the right of veto of marriages of members of the royal family.
Despite, it being repealed in 2015, it still applies to the first six royals in the line of succession – and that currently includes Prince Harry.
It states, however, that any member of the royal family over the age of 25 whose marriage has been blocked by the sovereign can still do so one year later after giving notice to the Privy Council.

In other words, if Harry wants to marry Meghan he can.
In Montego Bay the stunning actress put her arm around the fifth in line to the throne as they watched his friend Tom ‘Skippy” Inskip pledge himself to his bride Lara Hughes-Young.
Cocktails and romance were the order of the day as the sun set. Perhaps the next time Harry’s ‘crew’ gather for a wedding it will be his own.