Policemen Shoot Rivers Assembly Members On Orders From Above 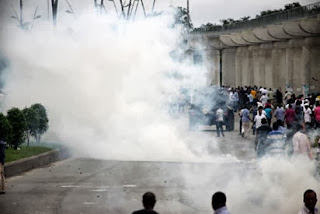 state House by looking down the Assembly complex when the lawmakers tried to resume their lawful duties.

The 25 lawmakers, in the absence of the speaker, then decided to sit with the deputy speaker presiding but men of the Nigerian Police fired live bullets at the

The actions of the police, according to what sources told Nigeriaonpoint.Com is because majority of the men are loyal to Governor Rotimi Amaechi and the Presidency don't want Amaechi's loyalists to head the house.

As at the time of reporting, there is chaos in the area and I hear some people have been injured by the police.