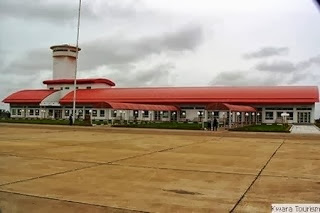 Three crew members on board a training aircraft of International Aviation College, Ilorin, escaped death as the plane crashed during a routine exercise.

The minor incident occurred at about 11.33 a.m. on Monday within the vicinity of Ilorin International Airport.

Abdulkareem, who announced the plane crash at a press conference in Ilorin, said it was the first recorded incident since its inception.

clinic for proper check-up and were certified fit.

He said the college had established contact with the Nigerian Civil Aviation Authority and the Accident Investigation Bureau, statutory bodies responsible

He said the management of the college was awaiting the arrival of the officials of both agencies from Abuja to investigate the incident.

Also the Kwara Government has concluded arrangement for the graduation of eight students from the International Aviation College, IIorin.

Mr Leke Ogungbe, the Deputy Chief of Staff, Government House, IIorin , disclosed this to newsmen on Moday in Ilorin.

Ogungbe said the convocation will hold on Dec. 5, adding that the first batch of 12 students graduated from the institution last year.

He said the college was set up to address the shortage of manpower in the nation's aviation industry.

The institution, he added, was mandated to provide assistance to the sector in the area of manpower.

Ogungbe said the state government would continue to create the enabling environment for investors, and called on Nigerians to be patriotic in their dealings to ensure rapid development. (NAN)

D’Banj and Don Jazzy Back Together: Working On New Song?

D'Banj and Don Jazzy Back Together: Working On New Song?