Photos: Police Unveil Face of the Husband to Nanny who Kidnapped Orekoya Kids

Faces of the fleeing members of a kidnap gang that connived with an evil nanny, Funmilayo Adeyemi to abduct three Orekoya kids and oth­ers in Lagos have been unveiled. They are two brothers identified as Rasheed and Hakeem Kareem.

The nanny, who abducted three children from the Orekoya family home in Surulere area of Lagos on April 10 within 24 hours after she was employed as a housemaid, claimed that she was pushed into the act by her husband, Rasheed Kareem, pictured above.

Funmilayo Adeyemi, the arrested notori­ous nanny, who confessed to be the master­mind of the kidnap
of the Orekoya and the Esharegaran kids in Lagos, was arrested on Wednesday last week. 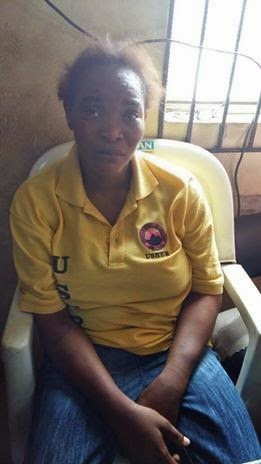 The mother of four and aged 35, Funmi­layo was declared wanted by operatives of the Special Anti-Robbery Squad, Lagos police command, Ikeja when the news of the kidnap of the Orekoya three kids by their nanny hit the media. The story was that Funmilayo who claimed that her name was Mary Akinloye was recruited through a popular online plat­form. She disappeared with the kids on April 10, barely 24 hours after she resumed work at the Orekoya family residence in Surulere.

The kidnap syndicate initially demanded N15 million from the Orekoyas, a ransom that was later negotiated to N13 million out of which N2 million was paid into a given bank account to bait the suspects. The chil­dren identified as Demola, 6, Adedamola, 4, and Aderomola, 11months were later dumped naked in an uncompleted building after nine days in their abductors’ custody.

She also admitted that her gang arranged the December 2014 kidnap of two kids, Raphael and Michael Esharegaran in Magodo area of the state. She equally confessed that her husband, Rasheed Kareem, brother in-law, Hakeem Kareem and their mother, who are still at large, are members of the kidnap syndicate, which she called ‘family business.’

According to the nanny, the family runs a kidnapping business, adding that her husband is the head of the gang. Saturday Sun learnt that the suspects, who in their early 30s, are known in their area as rich boys because of the exotic cars and choice apartment they live in. As soon as neighbours start questioning the source of their wealth, they will relocate.

She had said that the others (husband and brother-in-law) run the business side of the kidnapping and had collected N2m for the Magodo kidnap, which occurred December last year. The children were later found in Sagamu, 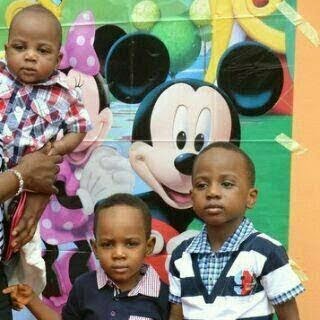 Funmilayo was arrested in the Shasha area of Lagos by operatives of Special Anti- Robbery Squad, Ikeja command after she was tracked down through the phone numbers and bank accounts submitted by the kidnappers.

Speaking on the progress made to arrest the fleeing brothers, the state police spokes­man, Kenneth Nwosu said that the police would stop at nothing until all the suspects are brought to face the wrath of the law.