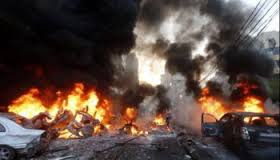 There was pandemonium in Adigbe area, Abeokuta, Ogun State, yesterday morning, as a filing station, belonging to Rabeng Petroleum, went up in flames, killing two persons while seven others, including a seven-year-old boy, were critically injured.

An eyewitness told Vanguard that the fire resulted from gas explosion that occurred while a local welder was carrying out a repair work at the filling station.

Vanguard gathered that seven makeshift shops, one motorcycle, and a pick-up vehicle were razed in the inferno that took several hours for fire fighters and other security agencies time to put out.

Speaking with newsmen at the scene of the incident, the Director of State Emergency Management Agency, SEMA, Mr. Shakiru Adebakin, said the fire incident was a man-made error that could have been averted if the owner of the filling station had followed a simple protection mechanism.

He said that the owner of the filling station should have known that it was wrong to have allowed a welding to take place in the station and if such welding was going to take place at all, certain precautionary measures ought to have been put in place.

Also speaking, Ogun State Commandant of Nigeria Security and Civil Defence Corps, Aboluwoye Akinwande, while narrating how the incident occurred, said: “This morning (yesterday), there was fire at one of the filling stations at Adigbe and immediately our officers and men quickly went there.

“On getting there, we discovered that a particular welder was trying to work very close to a gas filling plant.

It caught fire and spread. Two people have been confirmed dead, while seven were seriously injured.” He said the injured ones are currently receiving treatment at the General Hospital, Ijaiye, Abeokuta.

Hardship Made Me Steal My Customer’s Car – Suspect

« Hilarious! ‘NEPA I curse you with the smell of my spoilt soup in the fridge’ – Twitter User laments
Gobe! Client beats prostitute to death in Lagos for getting tired during cex »