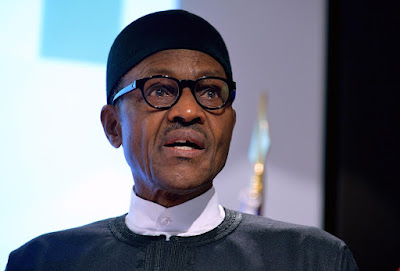 President Buhri today said those who stole Nigeria dry are angry with his government and so have recruited the services of militants in the Niger Delta to fight his government. He said this while addressing a group of Nigerians professionals residing in the US.

“We got into trouble as a country, because we did not save for the rainy day. For example, between 1999 and 2015, when we produced an average of 2.1 million barrels of oil per day, and oil prices stood at an average of $100 per barrel, we did not save, neither did we develop infrastructure. Suddenly, when we came in 2015, oil prices fell to about 30 dollars per barrel. I asked; where are the savings? There were none.
Where are the railways? The roads? Power? None. I further asked; what did we do with billions of dollars that we made over the years? They said we bought food. Food with billions of dollars? I did not believe, and still do not believe. In most parts of Nigeria, we eat what we grow. People in the South eat tubers, those in the North eat grains, which they plant, and those constitute over 60 per cent of what we eat. So, where did the billions of dollars go? We did a lot of damage to ourselves by not developing infrastructure when we had the money. Talking of our military, they earned respect serving in places like Burma, Zaire, Sudan, Liberia, Sierra-Leone, and then, suddenly, that same military could no longer secure 14 out of 774 local governments in the country. Insurgents had seized them, calling them some sort of caliphate, and planting their flags there; till we came, and scattered them. We raised the morale of our military, changed the leadership, re-equipped and retrained them; USA, Britain, and some other countries helped us, and today, the pride of our military is restored”he said

On Boko Haram, he said

“They ran riot, killing innocent people in churches, mosques, markets, schools, motor parks, and so on. And they would then shout Allahu Akbar. But if they truly knew Allah, they would not do such evil. Neither Islam, nor any other religion I know of, advocates hurting the innocent. But they shed innocent blood, killed people in their thousands. Now, we have dealt with that insurgency, and subverted their recruitment base. Those who stole Nigeria dry are not happy. They recruited the militants against us in the Niger Delta, and began to sabotage oil infrastructure. We lose millions of barrels per day, at a time when every dollar we can earn, counts. It is a disgrace that a minimum of 27 states, out of 36 that we have in Nigeria, can’t pay salaries. But I prayed so hard for God to make me President. I ran in 2003, 2007, 2011, and in 2015, He did. And see what I met on ground. But I can’t complain, since I prayed for the job. In the military, I rose from 2nd Lieutenant to Major-General. I was military governor in 1975 over a state that is now six states. I was head of state, got detained for three years, and headed the Petroleum Trust Fund (PTF), which had N53 billion of that time in Nigerian banks. God has been very good to me, so I can’t complain. If I feel hurt by anybody, I ask God to help me forgive. He has done so much for me. After 16 years of a different party in government, no party will come and have things easy. It’s human. We need quality hands to run Nigeria, and we will utilize them. I will like to welcome you home when it’s time. But I’ll like you to be ready.”he said