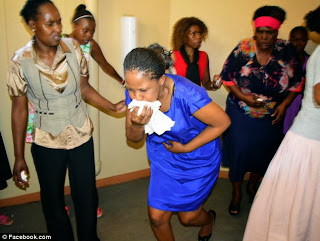 Centre Ministries made his congregation eat grass to 'be closer to God' went viral, it has now been revealed that dozens of church members are now ill as an aftermath.

Photos that follow show dozens of people getting sick in the toilets – an image of the bathrooms show women clutching their stomach, while the men are vomiting in the sink.

A news paper reports that during a service of at least 1,000 people in a marquee Daniel screamed ' sleep' and six people went to sleep.

He ordered other congregants to slap and trample on them, but the sleepers remain rigid and unresponsive until he ordered them to wake up.

months. I love this, I don't want to be

bored. You can even make police go to

sleep when they come to arrest you,' he said.

Although Daniel has not responded to the backlash that followed the report of his members eating grass and falling sick as a result, yesterday he posted on Facebook: 'God is at work and His people are testifying right now at the farm.