Pastor Fireman Is Innocent, My Son Lied Against Him – Mother 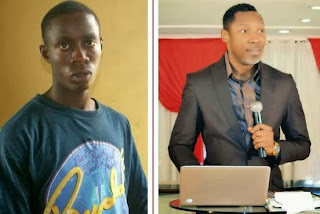 I don't know if we should believe this woman's story since the Police say they arrested Pastor Fireman after he tried to escape arrest for over five days. Read the latest twist to the story
below…

The allegation of involvement in ritual murder of a young girl levelled against Ofuche Ukoha a.k.a Pastor Sign Fireman has been debunked by none
other than the alkiller's mother.
Ikechukwu's mother, Esa Egbo, is however

said to have stated that her son's words should be taken with a pinch of salt as he is possessed of an evil spirit and has never even met the pastor in question.

Mrs. Egbo, who disclosed this to journalists on Thursday is also said to have added that her son is a habitual criminal as he had been arrested four times by the police in Badagry for attempting to rape young girls
between the ages of 10 and 15.

She said two years ago a neighbour laid a curse on her son and after then he started acting strangely, thereby attempting to rape little children whenever he sees them.

Ikechukwu Friday was arrested after being accused of strangling the 12-year-old girl for ritual purposes and he is said to have confessed that Pastor Fireman is the mastermind of his
crime.

But his mother, Mrs Egbo said she and her family are members of Pastor Fireman's church, known as Perfect Christianity Mission in Surulere area of
Lagos, adding that her son does not know or have any access to the cleric, whom he claimed sent him to kill the girl.

According to her, "He started two years ago to molest girls in attempt to rape them. It is not an ordinary thing. Whenever he goes out during the
day and sees a little girl he would grip and attempt to rape her and the girl would scream alerting people around, who would arrest and beat him up before handing him over to the police at Badagry Police Station.

"While these things were happening, I told our branch pastor at Badagry about it but I didn't tell our GO.
"On this particular case, he told me that he was going to work at a place where a building was demolished by government opposite the French
Village in Badagry.

They are actually constructing a factory at that place and he used to help them carry bags of cement for which they paid him some stipends at the end of the day.

"He failed to return home that day and I and his father went out to look for him at his place of work and people around told us that they didn't see him.

The next day we didn't see him, so by Wednesday, we decided to go to the police station at Badagry.

"A police woman we met told us that we should go to the SCID to look for him. I asked her what was his offence and she refused to tell me, rather she said when I got to the SCID that I
would know what was my son's offence.

"The next day I and my husband went to the SCID and when I saw my son he told me that there was a woman who sells food close to where he used to work and the woman had a daughter.

"He said on that day he was eating at the woman's shop when he saw the girl passing and all of a sudden something came over him and he
stood up and followed the girl and gripped her so tight and the girl screamed and died after which he regained consciousness.

"My son didn't accuse the GO. I don't have the GO's phone number and that of my son. My son didn't beg the GO for money and even our branch pastor he has never gone to beg for money.

Ikechukwu was the most gentle of all my children but this demon destroyed his life."

Pastor Fireman reacts I hear Pastor Fireman has also denied knowing
the young boy who claimed he had been promised N100,000 by the preacher to do the deed.

In his words: "I don't know that boy and if anybody should know him or his family as members of our church, it's the Badagry branch pastor. I am the GO of my church. You can imagine how possible it would be for an 18-year-
old boy from a distant branch to have easy access to me talk alone contracting him to kill someone on my behalf."

Hope this case will get to a logical conclusion and if true, the boy should be delivered before he kills more.