Passengers Aboard Aero Flight Abandoned For Hours On Tarmac In Abuja 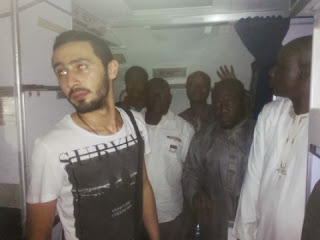 Passengers aboard an Aero Contractor Boeing 737 plane scheduled for a trip to from Abuja to Lagos were left stranded inside the aircraft for several hours, with airline officials nowhere in sight to offer

any explanation, SaharaReporters has learnt from a source who was one of the abandoned passengers.

"It was as if the Aero Contractors turned us into prisoners of war," said the passenger, adding that many passengers were terrified as the plane sat on

the tarmac of Nnamdi Azikiwe Airport in Abuja for several hours, with passengers locked up inside.

Our source disclosed that Flight AJ132 from Abuja to Lagos was supposed to take off at 8 p.m., but was delayed until midnight. Then, once passengers

boarded, they were left inside the aircraft until 3 a.m. on Saturday. He added that the pilots and the crew

left the aircraft with the passengers without giving any explanation. A source at the airline said it was a case of "Aircraft On Ground", a term used to depict seriousness of engine trouble that causes an aircraft to be grounded.

"I think this kind of thing can only happen in Nigeria where customers are treated by an airline as if they were just rats trapped inside a plane, and the pilots and crew members disappear just like that."

SaharaReporters could not reach a line for Aero Contractors to obtain an official response to the incident. Several passengers booked on other Aero's

Guy Proposed To Girlfriend Dressed As A Homeless Man

Guy Proposed To Girlfriend Dressed As A Homeless Man