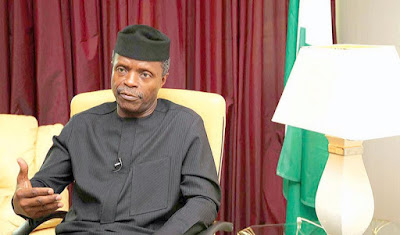 A source told the News Agency of Nigeria that the police chief briefed the Acting President on efforts so far made by police to rescue the victims unhurt and apprehend the kidnappers.

Premium Times reported how the Germans were kidnapped and how two Nigerians who tried to rescue them were killed in the process.

Usman Kagarko, a witness who joined many others in going after the assailants, said their effort ended when the kidnappers turned back and opened fire.

“We had to scamper for our safety when they opened fire, shooting sporadically at us, killing two local hunters who were in our lead as we chased them on our motorcycles and on foot,” ,” he told PREMIUM TIMES. “If only we are armed or in company of armed security, we would have stopped them because they are on foot.”

He gave the names of the two victims as Anas Ibrahim and Adamu Abdulrahim.

He said many locals were familiar with the Germans who for many years frequently travelled from Abuja to Kaduna for their work.

“So we felt personally concerned that this very friendly foreigners are innocently abducted by criminals under our nose,” he said.

The police have since dispatched a team of special forces and to work in synergy with the police command in Kaduna State and indigenes of towns and surrounding villages where the archaeologists were kidnapped.

The Special Investigation Team on Kidnapping and Terrorism Cases under the Command of the Deputy Inspector General of Police, Department of Operations, is also participating in the rescue operation.

The kidnapped archaeologists, working in collaboration with National Commission for Museum and Monument on the relics of NOK Culture in Nigeria, were kidnapped on Wednesday morning at an excavation site in Kadarko Local Government Area of Kaduna State.

BREAKING: New IG Of Police Gets Shortlisted By Buhari