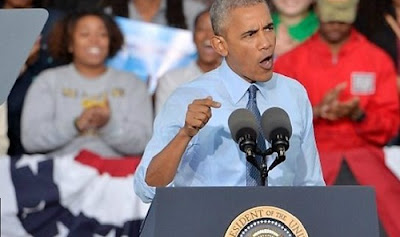 Damn! Obama has some harsh words. President Barack Obama has blasted Donald Trump’s recent remarks about women, saying they would be intolerable even for someone applying for a job at a 7-Eleven convenience store.

Many top Republicans have however distanced themselves from Trump when a video in which he boasts of groping women surfaced.

Trump has however accused them of DISLOYALTY.  He was particularly scathing about House Speaker Paul Ryan whom he described as a “weak and ineffective” leader.

Addressing a campaign rally in Greensboro, North Carolina, on Tuesday evening, Obama referred to Trump’s crude remarks about women, saying: “Now you find a situation in which the guy says stuff that nobody would find tolerable if they were applying for a job at 7-Eleven.”

“The fact is that now you’ve got people saying: ‘We strongly disagree, we really disapprove… but we’re still endorsing him.’ They still think he should be president, that doesn’t make sense to me,” he told the crowd.