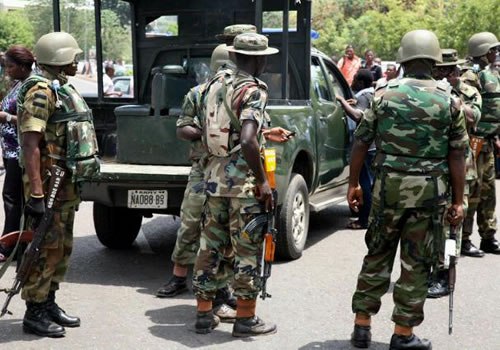 The Nigerian Army on Wednesday confirmed the arrest of the Chairman of Mafa Local Government Area of Borno, Alhaji Shettima Lawan, for his alleged link with Boko Haram.

Maj.- Gen. Lucky Irabor, Theatre Commander, Operation Lafiya Dole, confirmed the arrest of the council chairman during a news conference at the 7 Division headquarters in Maiduguri.

“The chairman was in the habit of accommodating people that had fled from the bush.

“At some point, he has been valuable to us being with the Civilian JTF to fight Boko Haram; but that does not mean we cannot investigate him for a crime like this.

“We have also arrested the Vice Chairman of Kaga Local government and he is undergoing interrogation,” Irabor said.

NigeriaDecides2019: INEC lists out areas where 2019 elections might not hold