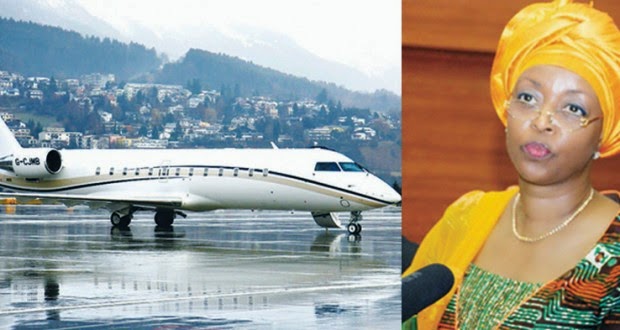 The Minister of Petroleum Resources, Mrs. Diezani Alison-Madueke, has halted the investigation by the House of Representatives into the N10bn she allegedly spent on a chartered private jet, Challenger 850, in the last two years for her trips.The House Committee on Public Accounts investigating the expenditure was set to conduct a public hearing on Monday, but it was stalled by an Abuja Federal High Court order.Alison- Madueke and the Nigerian National Petroleum Corporation listed the National Assembly and the House of Representatives as the defendants in the suit with reference number FHC/ABJ/CS/295/2014 and dated April 11, 2014.It was gathered that a “surprised” Tambuwal was served the restraining order on Monday morning.“This has never happened before in this country that a serving minister is asking a court to stop the parliament from doing its work,” a committee source told a source on Monday.
“These are indeed, no ordinary times. I am seriously disturbed about the way we want to run this country”, he added.The Chairman, House Committee on Media and Public Affairs, Mr. Zakari Mohammed, confirmed the development to journalists.“The court processes were served on us today (Monday); the speaker has been served.“Simply put, it is to notify us that, this matter which you want to investigate, we have gone to court”, Mohammed stated.Mohammed described Alison-Madueke’s action as a “temporary setback”? for the House, but assured the public that the legislature would fight to the finish.According to him, being a “law-abiding House”, the first reaction was to put the hearing on hold until legal opinions were sought.He spoke further, “We expected the minister to be here today(Monday) for the hearing.“Instead, we have been served with court processes. As law-abiding citizens, we have decided to wait. We will tarry awhile, take some legal opinions and move on from there.“What has happened tells you the kind of frustration that the House is facing. A matter of public importance is under investigation and a minister is telling us that she has gone to court.“However, our job is to expose corruption. We will study the court papers and take it up from there.”The PAC Chairman, Mr. Solomon Olamilekan, expressed shock over the minister’s decision to “rush to court.”He asked, “Is this to say there is something to hide? What was she afraid of that she went to court?“The restraining order was served on the Office of the Speaker, stopping us from going ahead with the investigation.“As a committee, we have not seen a copy, but since the speaker was served, we cannot pretend not to be aware.”It was gathered that, while the original mandate of the committee was to investigate the alleged N10bn expenditure on the Challenger 850, the committee stumbled on additional information indicating that Alison-Madueke chartered two other jets.One of them, a Global Express XRS, was said to have cost €600,000 in a return charter trip to London.Olamilekan claimed that all was set for the probe on Monday (yesterday) only for members to be confronted with the news on the court order.He stated that two aviation firms, Visa Jets and Jet Hanger, had already made submissions to the committee.On the part of the NNPC, Olamilekan said the committee received a letter from the corporation asking for an extension of the deadline.However, he admitted that, with the minister’s decision to go to court, the committee had been compelled to await the outcome of the court processes.But, findings revealed that the committee members were in a dilemma long before the court order reached the House on Monday.Alison-Madueke had twice failed to respond to letters the committee wrote, asking her to state her side of the allegation preparatory to the public hearing.A further directive to make the submissions before April 28, was again ignored.When contacted on Monday, an official at the Petroleum ministry, who pleaded not to be named because he was not authorised to speak on the subject, said, “I can confirm to you that there has been some leads as to why the minister decided to stop answering the House.“In fact, the court order is one of such leads and it has restrained the House from probing her.”Another official said the Group Managing Director, Nigerian National Petroleum Corporation, Mr. Andrew Yakubu, and the minister decided not to honour the House panel’s request “because they’ve been very busy lately.“The minister is a very busy woman, so also is the GMD. They can’t be answering to every call at the detriment of their duties at the ministry and the NNPC and we hope that with this court order, these things will be adequately addressed.”The FHC will on Tuesday (Tuesday) begin hearing in the suit by the minister and the NNPC.In the suit, they asked the FHC for an order of interim injunction restraining the respondents “whether by themselves, their members, committees or agents from summoning or directing” their appearance “before any committee, particularly the PAC set up by the House of Representatives” to conduct the investigation.They also want the court to stop the committee from asking any official of the ministry or the NNPC to produce any papers, notes or other documents or give any evidence in line with a letter from the House dated March 26, 2014, pending the hearing and determination of the motion on notice.In the same vein, they asked for an order of interim injunction restraining the defendants from issuing a warrant to compel the minister’s attendance, or the attendance of any official of the ministry or the NNPC, with regard to the investigation.In the alternative, the plaintiffs want the court to make an order of status quo, directing the parties to maintain the current position with regard to the investigation, as of the date of filing of the suit.The court order which was made available to our correspondent, indicated that after hearing an ex parte motion moved by Alison-Madueke’s counsel, Etigwe Uwa (SAN), Justice Ahmed Mohammed made an order directing the defendants to appear before the court to show cause why the interim orders sought by the plaintiffs should not be made by the court.