My dad is greater than Obasanjo – MKO’s daughter 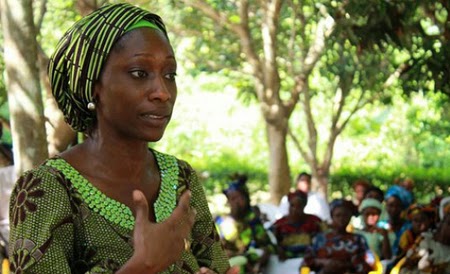 Responding to a recent statement by Obasanjo, she said her father did not need the former president’s recognition, because “MKO was a greater man”.

She linked her father’s greatness to his legacies, saying his dedication to the cause of the common man and a better Nigeria has immortalised him in the hearts of many.

She said: “If he wants to recognise MKO Abiola now it is good for him, but MKO was always the greater man and you cannot recognise somebody that is more than you. MKO Abiola did not require President Obasanjo to recognise him. He required Nigerians to see his heart and they did. That was why they rewarded him with the June 12 election, an election that was so free and fair that no Nigerian leader can claim that kind of mandate till today.”

Mrs. Abiola-Castello, who is the President of the Kudirat Initiative for Democracy (KIND), spoke at a rally held in memory of her mother, who was killed on June 4, 18 years ago.

Rights activists described MKO and Kudirat as “hero” and “heroine” of democracy, whose lives are beacons of what leadership should be about.

The activists said Kudirat’s and MKO’s deaths were reminders that all is not yet well with the nation.

Former Lagos State Governor Rear Admiral Ndubuisi Kalu (rtd.) urged leaders to live up to the expectation of the masses, so that the sacrifices of the Abiola family for democracy will not be in vain.

President of CD and Women Arise Dr. Joe Okei-Odumakin said the late Kudirat’s courage should be emulated by rights activists.

She said: “It is sobering for us that as we are here celebrating the 18th anniversary of Alhaja Kudirat’s murder, our country is under terror. School girls have been abducted; Emirs are either being whisked away or killed and bombs now fly like bangers. We need the kind of Kudirat’s courage to confront the evil plaguing our land.”

The activists decried the government’s attitude towards the plights of the abducted Chibok school girls, saying: “We are not only asking that the girls be rescued, but that they be returned to us alive.”