August 8, 2015: Bobbi Kristina Brown, the 22-year-old daughter of the late Whitney Houston and Bobby Brown, died on July 26 — more than 6 months after being found unconscious inside the tub of her Roswell home. Bobbi never regained consciousness and later DIED from the injuries she sustained that night.

Now Bobbi’s family is looking for JUSTICE, via a lawsuit against Nick Gordon. The lawsuit claims that on Jan. 31, Nick returned after “being out all-night on a cocaine and drinking binge.” The suit says that Gordon watched camera footage of Brown and listened to her conversations.

Gordon and Brown began arguing in the kitchen. The dispute moved to the living and then upstairs to the master bedroom. Gordon allegedly accused Brown of cheating and called her a number of names, the lawsuit alleges. The argument lasted about 30 minutes and then “everything abruptly became quiet.”

The lawsuit then says that Gordon “gave Bobbi Kristina a toxic cocktail rendering her unconscious and then put her face down in a tub of cold water causing her to suffer brain damage.”

According to the suit, Gordon then came out of the bedroom wearing different clothes than he was wearing in his argument with Bobbi Kristina, got into bed, laid his head on a female guest’s ankle and said, “Now I want a pretty little white girl like you.”

About 15 minutes later, a guest at the home went in to check on Brown and found her face down in a tub. A dust pan was at the bottom of the tub, the lawsuit states. Bobbi Kristina unresponsive, unconscious with a swollen mouth and a tooth hanging loosely from her mouth.

Gordon allegedly then came into the bathroom, let the water out of the tub and shouted, “Clean up, clean up.” Others, including Gordon, began efforts to resuscitate Brown and called for medical personnel.

Brown was transported to North Fulton Hospital, where she was revived. She was later placed in a medically-induced coma. Later, Brown was diagnosed with “global and irreversible brain damage” and the lawsuit says “as a result of [Gordon’s] actions.” 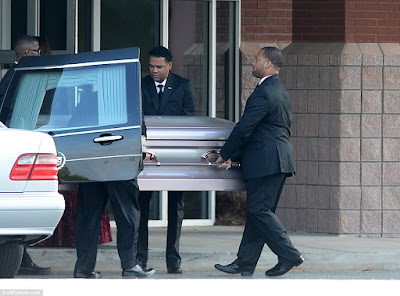 Bobbi Kristina is laid to rest, fight breaks out during the funeral | PHOTOS