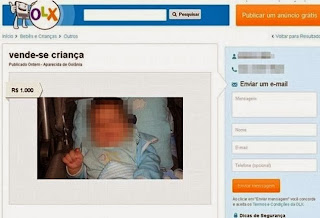 A Brazilian baby was put up for sale for just $430 because it wouldn't let its parents sleep, police said.

Cops in Aparecida de Goiânia, in the central state of Goias, are investigating after an ad for a tiny tot appeared on classified website OLX.

It featured a snapshot of a little boy, dressed in a blue outfit, alongside the caption: "Cries a lot and did not let me sleep and I have to work to survive".

The ad, posted on Tuesday, was pulled after only 12 hours for breaching the site's terms and conditions.

"We believe [THEY] may live in the Campos Eliseos neighbourhood […]but the address given does not exist. Also the phone number has no connection with the case", Orçai added.

OLX, which has operated in Brazil since 2010, said it had no involvement between advertisers and customers using its platform, reports Jornal do Brasil.

OLX classified website is the largest consumer trading website in the world with a presence in some 107 countries. Each month the company reports that it receives more than 100 million users buying and selling goods and services on its free classified site.

Whoever posted this ad need their azz whooped. Babies are supposed to keep you up at night, LOL.