A woman who was desperate to save her marriage and stop her husband from falling into the arms of younger women employed an unfamiliar way to achieve this. 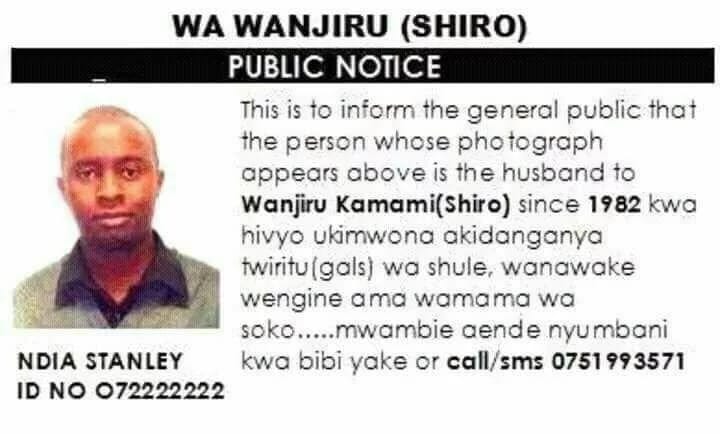 The woman who was only identified as Wanjiru Kamami or Shiro, published an advertisement on a Kenyan newspaper complete with her husband’s image, his phone number and his National Identification number. The translated ad above reads:

“This is to inform the general public that the person whose photograph appears above is the husband to Wanjiru Kamami (Shiro) since 1982, (sic) therefore if you see him getting lied to with school girls or young women at the market, tell him to go home or call my number 0751993571.”

Many Kenyans expressed shock on the woman’s desperate move while others found the whole situation hilarious.

See All the hilarious tweets, as #KenyansVsNigerians come for each other on twitter

« Poll on Trump’s travel ban shows more support for him by Americans
Miss Kenya was asked about Donald Trump; her answer shocked the world (WATCH) »