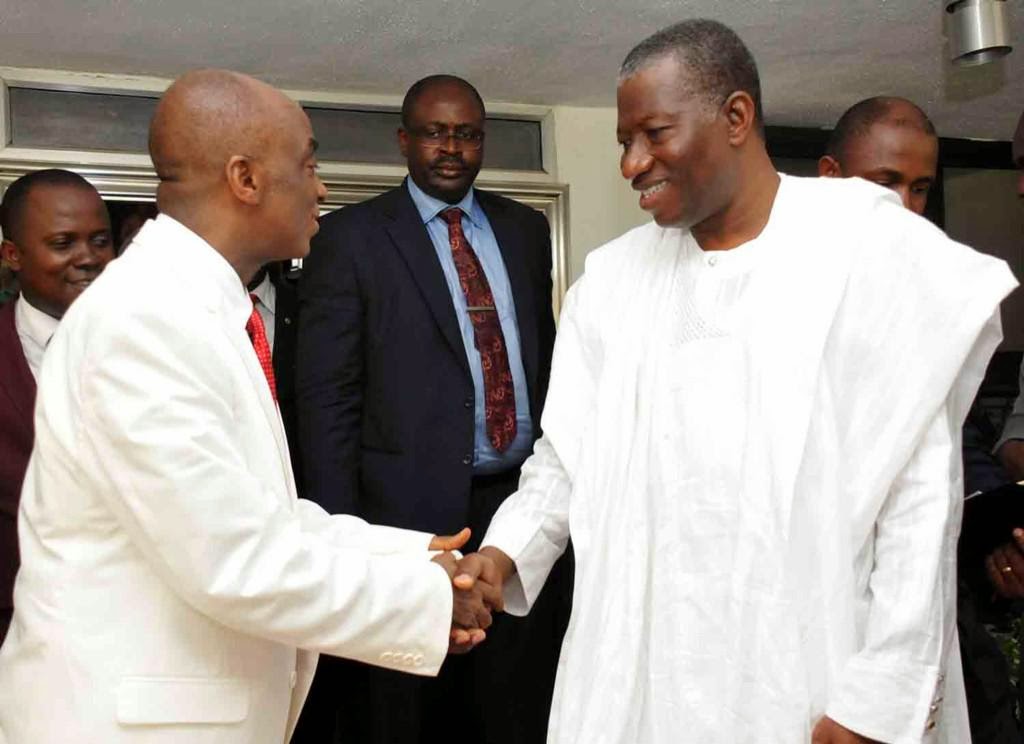 This did not however stop the prosperity preacher from praying for Jonathan.
Worshippers and clergymen got more than they expected with the visit of President Goodluck Jonathan to the headquarters of the church, located in Ota, Ogun State, western Nigeria on Sunday, when the church was hit with condemnations and criticisms from Nigerians.

President Jonathan, with some of his aides, the Chief of Staff to the President, Jones Arogbofa and the Executive Secretary, Christian Pilgrim Board, Mr. Kennedy Okpara, worshipped at the church during its third service after they arrived the church premises in a helicopter.

A few minutes after his departure, however, the internet went buzzing with the news of his visit as bloggers latched on to whatever they could gather. Many of them ended up misquoting and misinforming the public thus resulting in the outrage that greeted the President’s visit.

Nigerians were provoked by the statement falsely credited to the General Overseer of the church, Bishop David Oyedepo, saying he would open the gates of hell upon anyone who opposed Jonathan’s re-election.
Some of the bloggers even claimed that he warned his church members against voting for the candidate of the All Progressives Congress, APC, Muhammadu Buhari, and that anyone who went against this remains a candidate of hell.
The bloggers’ false interpretation of Oyedepo’s admonition irked Nigerians who saw this as an affront on their mentality and wondered if Oyedepo was God or if he actually had the keys to hell.

While some Nigerians said they were shocked that Oyedepo could make such a comment, others went comic calling him a man of “small gods.”

Unfortunately, however, many of these bloggers and news writers were not in the church during the President’s visit, but they all attributed their news to sources within the church.

Our correspondent who attended the third service of the church which was also attended by the President, his aides and politicians in the Peoples Democratic Party, PDP, from Lagos and Ogun states, reports that the drama however began from the church.
Before his preaching during the service, Bishop Oyedepo had given President Jonathan the opportunity to address the congregation.

Spending very few minutes, Jonathan, who said he did not want to say much so that Nigerians would not think he only attended the church to campaign, urged the members to pray for the country ahead of the general elections.

He said his call for prayers was necessitated by the various predictions by leaders and clergymen about the elections and their outcome.

“There are various predictions concerning the election, but I trust God to take control of the situation,” Jonathan said.

He also commended Bishop Oyedepo for his commitment to God’s work and to education, adding that only through education of its citizens would a country develop and progress.

“I commend Bishop Oyedepo for his commitment to the work of God and education, without education we can’t achieve much,” he added.

While some of the church members were excited to see Jonathan, others grumbled, saying he had suddenly turned to the Winners Chapel after he discovered that he is no longer welcomed at the Redeemed Christian Church of God since a senior pastor of the church, Prof Yemi Osinbajo, is now the running mate to Buhari who is contesting against Jonathan in the election.
Some also whispered that the pastors in the country were not helping matters as they are not acting like prophets and leaders in the Bible who spoke truth to people in power.
After his speech, the Bishop asked that the church members stand up and pray for the President.

He asked that since God always answered prayers of the church members, they should pray for God to give the President the wisdom and strength to rule the country and the unusual grace to lead the nation.

Our correspondent noted that while many stood up and prayed fervently, some sat down, while some used the opportunity to pray for themselves.
(Culled from Pm News)
To Receive Latest Music, Video & News Updates , Add Us To Your WhatsApp: 08035927807; BBM Pin: D1C43241

Reverend’s wife burns 9-year-old with iron, as series of abuses including a sexual one is discovered