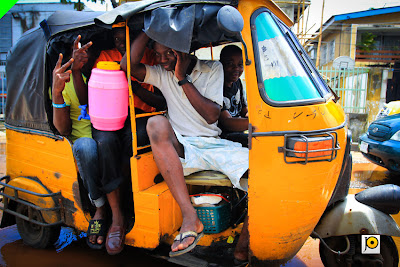 Tricycles popularly known as Keke Napep may soon go the way of their two-wheeled cousins as the Lagos State government has decided to restrict its movement from major highways of the metropolis.The state commissioner for transportation, Kayode Opeifa disclosed this yesterday to newsmen saying the tricycles do not feature in the state transportation model describing it as an “unsustainable means of transport.”According to the Sun Newspapers report:

He said that the state government had held several meetings with the unions on the development, adding “they have agreed to stay away from these roads.”
Opeifa listed the roads where tri-cycles operation has been outlawed at the entire Victoria Island, Government Residential Area, GRA Ikeja and Ikoyi. Also on Awolowo road and Awolowo way, Alausa and the entire major roads in Surulere local government area. The commissioner explained that tri-cycle isn’t a replacement for motorcycle popularly called Okada in the state.
He added that, “it isn’t a sustainable means of transport for the state especially Lagos that is a megacity.
He said the motorcycle operators who are selling their Okadas to purchase tricycles are doing so in error explaining that the new traffic law restricts the three-wheeled cycles.The reports continues thus:

“I learnt that some Okada riders have begun to sell their motorcycles to buy tricycle but they can no longer operate on these major roads again.”
He explained that section 3 of the 2012 Lagos road traffic law also outlawed the operation of the tricycles in the state.
“After that law was gazetted, the state government allowed tri-cycles to operate on some of these roads because vehicles available in those roads weren’t enough to convey the passengers plying the road,” he said.
He said the state “has enough Bus Rapid Transport, BRT and LAGBUS buses, taxis and others are now available on these roads and the tricycle wouldn’t be needed.”
According to him “they constitute security threat to lives and property in the state. While we are proud to improve on information of the removal of over 4,300 abandoned and disused vehicles from Lagos roads, it is saddening that recent survey by the CDA/CDC’s under the supervision of the Ministry of Rural Development have again in the last 3 months identified another 4,632 vehicles abandoned on over 9,100 roads in Lagos State.
“These vehicles are veritable tools for hoodlums, miscreants, armed robbers and other forms of social vices. So also they pose health risk. We will not relent on enforcement.
“To spare part dealers vehicle/Auto sales dealers please be advised as vehicles illegally displayed on road setback will be treated as abandoned/disused vehicle.”
The commissioner said , the state government has instructed officers of the Lagos State Traffic Management Authority, LASTMA and Vehicle Inspection Service, VIS, to commence immediate impoundment of any vehicle found on the pavement.
Governor Mr. Babatunde Fashola had last year signed the road traffic bill into law,aimed at improving safety on the Lagos roads.

KESHA- I ‘M PUTTING MY FACE ON CONDOMS

KESHA- I 'M PUTTING MY FACE ON CONDOMS