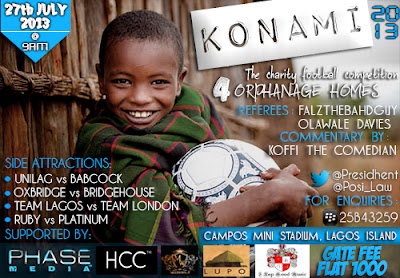 Summer is a time when wonderful things happen to everybody including quiet people, for those few months of summer, you’re not required to be who everyone thinks you are, and that cut-grass smell in the air and the chance to dive into the deep end of a pool give you a courage you don’t have for the rest of the year. you can be grateful and easy, with no eyes on you, and no past to remember, hence, summer just opens the door and lets you out of your shell.
Though Summer is still young, but it is on the verge of giving birth to a landmark idea called KONAMI2013.

KONAMI2013 is the first inter-orphanage homes football competition in lagos which will take place on the 27th of july 2013 at the Campos Mini Stadium, Lagos island at about 9am (No African Time) . The Charity Football Competition  will feature 4 Orphanage Homes accross Lagos in a Competitive Soccer Fiesta , AlongSide Side-Attraction Matches Which Includes

Amidst Musical Performances From Several Up and Coming Artistes.
The Competition will also Be Officiated By 3 Celebrity Referees namely FalztheBahdguy, the ‘HighClass’ Crooner, Seantizzle ‘The Sho le Crooner’ and Olawale Davies, A Young Prodigy From Unilag. 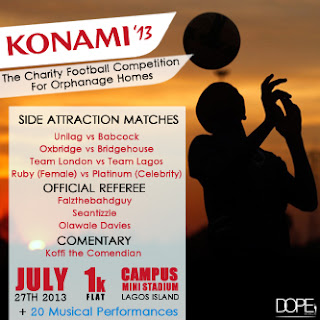 KONAMI2013 – is one the numerous ideas from the idea bank of the Presidhential Initiative for lagos youths this summer.
The event is  Proudly Supported by active youths and passionate university students from various fields – Hype City Crew™, Phase Media, Reel Radio Online, House Of Lupo, IrepGoodMusic, DKO clothings, Moonwalk Photography, XLT photography , Tudors amongst others. Funds made from the gate fee will serve as fundraisers for the 4 orphanage homes present on that day whilst their is an official theme song for the event which will be out soon, and it will feature various youth artiste with musical Prowess.