In what seems like shots fired, Nigerian singer, Iyanya, shakes table with ex-business partner, Ubi Franklin, perched atop it.

Iyanya shared a quote this morning and we can only guess who he is referring to.

The post, which he has now taken down form his InstaStory, reads;

For some.. Lies and deception come all too easily, it is done so often they don’t even know what is true and what is a lie. They have no conscience and believe that consequences won’t apply to them… this is the way of a COWARD. Rest assured, I stand by my word and there will be consequences to pay.. Karma 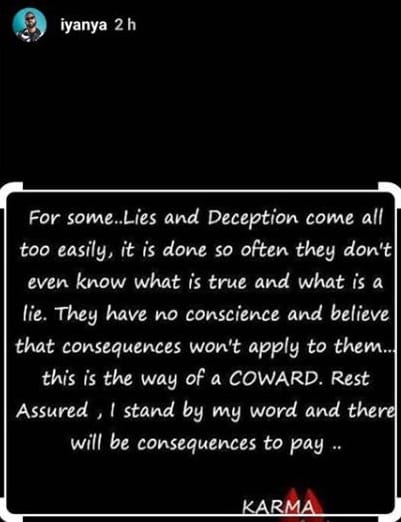 This is coming during the calling out of music executive, Ubi Franklin, by different women, for defrauding them of millions of Naira.

Recall that, few months ago, Iyanya publicly called out his former manager and business partner, Ubi Franklin accusing him of fraud. Ubi has since been in the news for a lot of wrong reasons since the Iyanya ‘tell it all’.