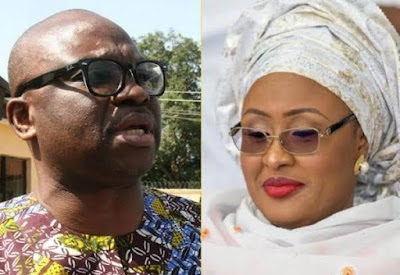 Aisha Buhari has filed a lawsuit against Ekiti state governor, Ayo Fayose over his claim that she was involved in the Halliburton corruption scandal. Fayose had in a statement he released in June alleged that Aisha Buhari was the “Aisha Buhari” named in a U.S. court document, alleged to have been involved in a bribery case involving a former U.S. lawmaker, Williams Jefferson.

Although Aisha Buhari has denied the claims and even threatened a lawsuit, Fayose still insisted that she was the one indicted in the corruption case. ‎The lawsuit was filed today July 20th. No judge has been assigned to the case yet but Fayose enjoys immunity as he is a sitting governor.

Sack of 2,000 workers in Ekiti is height of wickednes, political vendetta – Fayose