I Thought It Was Holy Water – Suspected Pipeline Vandal 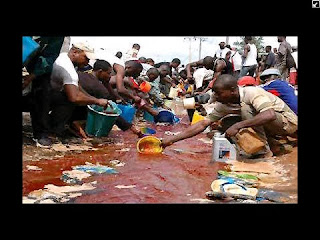 Salami Amodu, 65, who was, along with others arrested by operatives of the Inspector General of Police (IGP) Special Task Force on Anti-Pipeline

Vandalism Unit, had this to say:

"I was on my way home when a man, popularly known as Alfa, stopped me. He promised to pay me N5000 per trip if I can help him to carry 10 gallons of liquid. I thought it was water, so I did not bother to ask, since it's a good business. It is
possible that the water could be anointed since he was ready to pay as much as N5000.

"It was while we were on our way that I started to perceive the odour of fuel. I asked him and he told me that it was fuel. I was so annoyed and I shouted at him for not telling me in the first place
what was in the gallons. Initially, I wanted to stop the car and ask him to off load the vehicle, but when I realized that we were almost close to his destination, I decided to continue. I am aware
that vandals normally pass through that route that was why I was very angry with him.

"In that area, people go for prayers. Clerics come to that area to buy holy water to perform miracle.
Most of the times when I am done with the day's job, especially if I did not make much money, I will go down to the bush area to see if there is anyone who needs lift. I also ensure that I do not carry vandals because those days when I used to help them, it landed me into trouble with security men. Although, there is money to make in that business but the risk is much. This was why I stopped a long time ago till Alfa deceived me into
carrying fuel for him.

"I am very sorry. It is of no use denying that I was not involved because I was caught with the product. Life has been unfair to me if not, at this age, why should I be hustling for money to feed
and take care of my family. I am very sorry."
Another suspect, Joseph Ofoeyeno, claimed that his duty was just to transport the stolen products from the bush to the buyers:

"Initially I was buying directly from NNPC staff close to the depot. Normally, NNPC staff will overload their trucks and sell the excess to us before preceding to off- load the rest for the buyer. The place was however shot down when there was a fire outbreak. I had no choice than to
patronize these vandals. I am sorry and I wish NNPC will be allowing those their truck drivers to carry excess."

Bruce Ekonen stated he actually went to the bush to see a cleric for the gift of the fruit of the womb: "I have been married for the past 8 years and my wife has not been able to conceive. I have tried my hands on different women outside but none has ever returned with the good news that she is pregnant.
"I was actually on my way when I saw Francis and asked him for a lift. We were on our way to town when the police arrested us. I was looking for the fruit of the womb not stolen fuel. I was even
advising Francis to stay away from illegal
business of selling stolen product when the policea rrested us."

Confirming the arrest, Assistant Commissioner of Police, Friday Ibadin, who is in charge of the Task Force, said, "Detectives led by Sector Commander, Lagos, DSP Onaghise Osayande, laid
ambush and nabbed these suspected vandals. It is worthy to remind Nigerians that ignorance is not an excuse. Both the seller and buyer of stolen products are liable. Meanwhile, the suspects
would soon be arraigned in court at the end of investigation."