Yvonne Nelson engaged in a dirty fight on Twitter with her colleague/journalist Victoria Lebene, whose husband Eugene Osarfo-Nkansah shared a viral post of a fan mocking her on Twitter.

The troll who dropped a shade post in reaction to Yvonne Nelson’s tweet which read “know your worth”, asked the actress if having a baby for a married man was her knowing her worth. 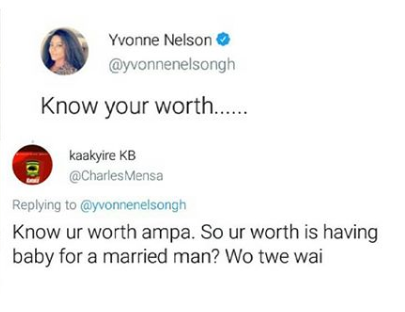 The comment which was retweeted by Eugene Osarfo-Nkansah, ignited the wrath of Yvonne Nelson who stated that she never knew that her tweet about one knowing his or her worth bothered him. The actress also revealed that her baby daddy, James Roberts was divorced when she met him.

“And to you Nkonkonsa, my tweet about knowing your worth bothers you??

“The dumb charles in kokonsah’s post, you are CURSED for life! Mark my words! Never bring my baby(daughter) into anything negative! God punish you! I’ve given you all the publicity you want! Enjoy it.” 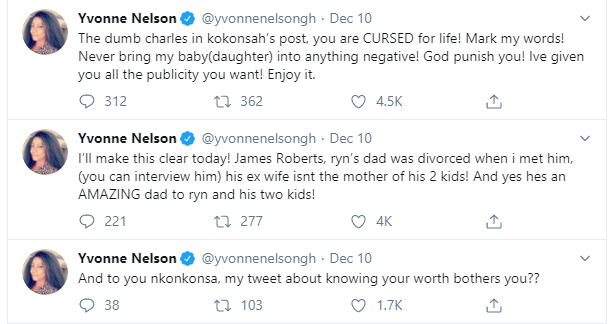 Victoria Lebene however stepped in to defend her husband and also told Yvonne Nelson to be tolerant of people’s opinion ‘regardless of its sensitivity’ because she is an opinion leader.

“If we all decide to be Opinion leaders, then we should be ready to receive other opinion, regardless the sensitivity. People’s opinion cannot be controlled, that’s the sad part.”

Yvonne Nelson who fired back at Victoria, described her and her husband as ‘bunch of losers’. She also said that she prays Victoria’s marriage lasts and no one disrespects her baby.

“Bunch of losers! Y’all are pathetic. Someone is supporting her hubby for posting a diss, don’t worry. You’ll get pregnant/or is already pregnant, I pray you get treated with respect, and hope no one disrespects your baby. I pray your marriage lasts too.”

After sharing $9m on social media, Japanese billionaire hunts for girlfriend to take on trip to moon