‘I didn’t come here to waste time, Man Utd must match my ambition if they want me to stay’ – Zlatan Ibrahimovic 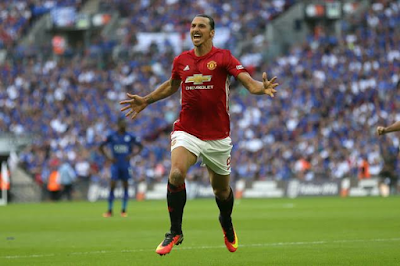 Man U’s highest goal scorer this season and football’s king of egotism, Zlatan Ibrahimovic has sounded a warning note to Manchester United and Jose Mourinho, that he’ll only remain with the club beyond this season if they match up with his ambition.

Ibrahimovic, 35, has won all the major titles in club football with previous clubs, Barcelona, PSG, Ajax, Juventus, Inter Milan and Ac Milan and with his contract set to expire this summer, has been loinked with a move to LA Galaxy in the U.S and the Chinese Super League.
He has scored 27 goals in all competitions since arriving on a free transfer from Paris Saint-Germain last summer and for a player who has once compared himself to a god and even called himself ‘not a mere mortal’, his warning to Manchester United won’t come as a surprise. 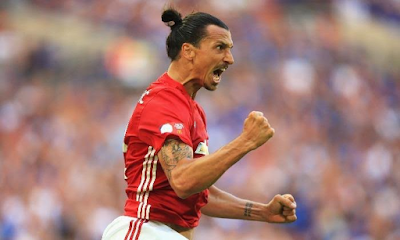 ‘I’m 35 and a lot of things have to be settled.
‘It’s not like I’m 20 and I have another five or 10 years. Probably I have one, two, three years so everything depends on what you want and what the club wants; what the vision of the club is because I said from day one I didn’t come here to waste time, I came here to win. If you want to win bigger then you have to create bigger.
‘Listen, if I had something to say I would already have said it. We are talking. Whether we were far from each other or close to each other, there is no news. There are still talks and let’s see what will happen. I am open. Nothing is done yet.
‘I came here without the Champions League. I came here with the team as it was. It was not a team that was favourite to win. I still came. I came to help. I came to do what I am able to do. To make it better. To bring the team to higher views, so let’s see what happens.’
United remain fifth following Tuesday night’s 1-1 draw with Everton at Old Trafford, with their hopes of finishing in the top-four looking doubtful and Ibrahimovic, who returned to the line-up after a three-match ban and scored their last-gasp equaliser from the penalty spot said the season has been so-so so far.
‘We are doing everything to create chances and to take our chances,’ he added. ‘The table of the competition is not lying.
‘The team is what it is and we have done I think a great season and we have won two out of five trophies and have two more to play for.
‘If we got those points we would be higher but I think we have done great we have done good for the team that is and then the table is not lying.
‘If we would be higher the team would be better, yes, but it is what it is. We have to be realistic. We have been working hard.
‘There are still two months to go. A lot of things can happen. Of course we want to get the win.
‘The nice thing is that we have not been losing for a lot of games, so it is what it is and if we would have been a team for No 1 spot, we would be No 1 today.’

Video: Jaffy Pee – I Aint Playing With You

#NGASLE: Sierra Leone pull off amazing comeback from 4-0 down against Super Eagles

Lionel Messi reveals why he wanted to leave Barcelona