How we kept Zuckerberg’s visit a secret — CcHUB CEO, Tijani

Nigerians were very surprised during the week when news broke that Facebook CEO, the 7th richest man in the world, Mark Zuckerberg was in Nigeria.

Bosun Tijani, pictured below with Mark and CEO/Co-founder of the Co-creation Hub (CC-Hub), an incubator for technology start-up companies in Lagos, has opened up on the circumstances that led to Mark’s grand visit. 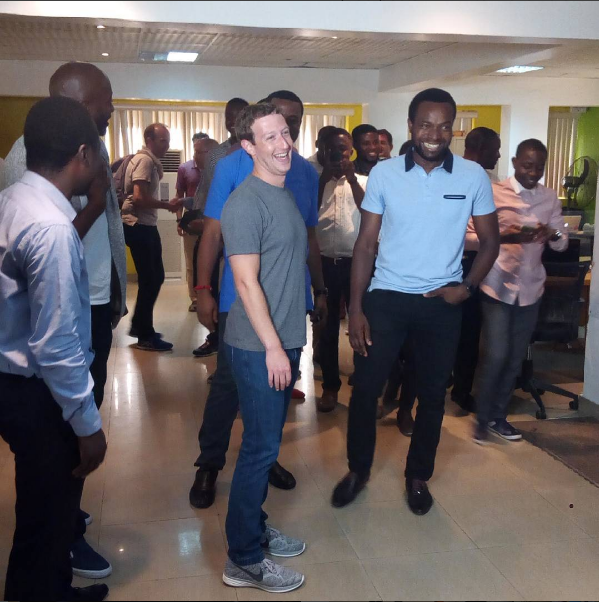 Speaking during an interview with Punch Newspaper, Tijani said they were warned not to make Mark’s visit public or he will turn back and go home.

It was challenging. We were literally warned not to (say anything); if there was a leak, he would turn
back, he wouldn’t come. The sixth or seventh richest man in the world; it was a security threat. We didn’t know on time that he was the one that was coming; we knew a CEO or executive was coming from Facebook. Then few weeks before his arrival, we were informed that he was coming.

I had absolutely no expectations. I didn’t know what to expect. Of course, everyone was stunned to see Mark. People were confused. But he was a cool guy, reasonable, mingled with everybody and took selfies.

I think he was really stunned at the entrepreneurial spirit of Nigerians. He said from the moment (the plane) landed, people were different and the way people just wanted to do things, he could tell that a lot of people here are serious-minded entrepreneurs. He sees the opportunities, not only the fact that we have a big market; we have people who are talented, people who are dreamers and for him, that is a major part of our future and one of the things that will determine how far we go as a people.

Who would not be excited? This man is worth about, how much, between $53 and $55bn. That is a lot of money. He is worth much more than our budget. He is, probably, the sixth or seventh richest man in the world, walking the streets of Yaba, right here in Nigeria.

I think for a country like Nigeria, with all the bad press that we get and the cynicism around the name Nigeria, that was a huge surprise for everybody. It is unbelievable to a lot of people that Mark actually chose to come to Nigeria. It gives us hope that there is something unique about this place.

But unfortunately, we are not taking advantage of it. Again, think about it, do you know that he came in on the day Nigeria was proclaimed to be entering the worst recession in 29 years? What sort of coincidence is that? When the world is telling us that we are going down, one of the richest people in the world came and he was telling us, “You have a lot of good in you and you can go up.” It is a message.

Dope! How Timaya, Vector, AY, Gbenro, others stepped out for #BuckwyldnBreathless concert

Borno massacre: US reacts, vows to work with Nigeria to defeat terrorism