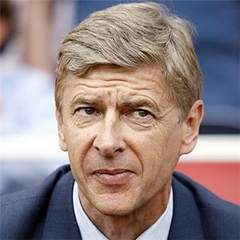 Arsenal manager Arsene Wenger has paid tribute to his old rival  Alex Ferguson, who will retire at the end of the season after 26 years in charge of Manchester United.

Ferguson and Wenger have had plenty of duels over the years, particularly when the two clubs were vying for the Premier League title in the late 1990s and early 2000s.

Wenger,  who arrived at Arsenal in 1996, will become the longest-serving manager in the country when Ferguson retires.

And he said Ferguson’s achievements in the game are “exceptional.”

He told Arsenal’s website on Friday, “I would just like to pay tribute to an unbelievable achievement and a fantastic career.

“Basically the achievement is immaculate, when you look at the whole structure and consistency of the achievement. It is, of course, something exceptional.

“It is difficult to imagine English football without him, but it’s now a reality and a fact.

“Of course the next manager has to fill in and show he has the dimension to do that. It is a big task for the guy who comes in.”
David Moyes has been confirmed as the man charged with taking over and Wenger says following Ferguson is a tough task.
He said,  “What you can say still is that Manchester United are commercially and financially one of the strongest two or three clubs in the world, and that is still a good basis to start when you come in because you know the players are there, the team is there, and the potential is there.”