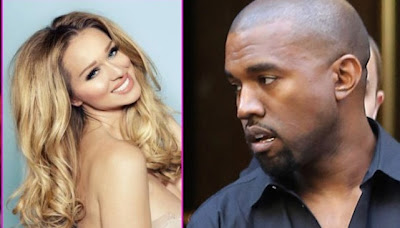 Kanye West was alleged to have been getting  intimate with a blonde bombshell called Katarina Van Derham. It’s claimed it happened at a BET after party. Several witnesses claim he spent all night chatting and getting Cosy with her

The lady in question, who is also the owner of VivaGlam magazine claims he doesn’t even know who she is and that the only time they had an interaction was when he glared at Katie her friend (Katie is a model who staged a animal rights protest outside the Kardashian’s DASH store last year) as he left the VIP

Poor Kanye. He doesn’t even know who I am! I never got introduced to him.We never even said a word to each other. They’re just looking for stories. I feel bad for him’When Kanye walked by, he looked at Katie like he recognized her.’I’m not sure if he just looks like that, but he kind of turned twice and took a second look at her. He looked like he wanted to kill her.’I didn’t even see him talking to other girls

Meet the Woman with the world’s largest butt implants