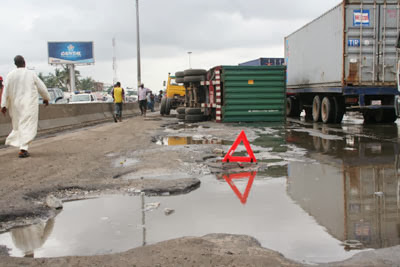 Against the backdrop of deteriorating Federal roads nationwide, the Federal Government may have decided to reintroduce tolling on its highways, to raise money to fix the roads.A policy document on the reintroduction of tolling may be forwarded to the Federal Executive Council by Works Minister, Mike Onolememen, for approval and implementation.
The policy document is known as Green Paper: Federal Roads and Bridges Tolling Policy for Nigeria.’The Director, Public, Private Partnership, Federal Ministry of Works, Babatunde Ekusinmi, who disclosed this to newsmen noted that “Nigeria had operated some toll roads for several years, but they were abandoned in 2004, due mainly to legal disputes, revenue leakages and unmet maintenance of the tolled roads. With tolling once again being considered as a policy option, Nigeria has the advantage that it can assess successfully and execute tolling to develop, build, manage and maintain roads”.The Green Paper proposal claimed that tolling policy would foster the improvement of Nigerian roads and bridges. “Tolling would generate the revenue needed to recover cost to the private investor of the construction, rehabilitation, financing, maintenance and operation of the road and bridge, and to achieve reasonable returns for that investor; the Federal Government would enter into toll concessions only where such concessions are financially viable and forecast traffic volume is high (unless there are strong economic or social grounds).The Paper also said the Federal Government would permit tolling only for specific roads and bridges where the related investment results in significant improvements for road users and toll payers; the Federal Government would ensure that tolls are ring-fenced and dedicated to defraying the costs of rehabilitation, upgrading, maintenance and operation of such roads; the Federal Government would introduce mandatory public consultations prior to tolling any road or bridge in Nigeria, to provide users with critical information in advance of the tolling being introduced.The Federal Government would give preference to tolling by established and reputable private firms; toll rates would distinguish between vehicle classes to reflect the cost of providing road space to a class of vehicles and their relative usage impact on road pavements; tolls should be fixed during the length of a concession, subject only to periodic increases which are agreed in the contract and are based on an adjustment formula which takes account of inflation and other variables.Ekusinmi said it would be necessary to empower concessionaires to appoint officers with powers to stop vehicles and verify toll payment, and such powers would be clearly specified and circumscribed to avoid potential for abuse.He said the Federal Government would speedily implement institutional reforms to clarify responsibilities for implementing and overseeing road and bridge tolling; the Federal Government would ensure it has sufficient capacity to oversee the implementation of toll concessions – initially through the Ministry of Works and Federal Roads Maintenance Agency, FERMA, and subsequently through the establishment of the proposed Federal Roads Authority, FRA.He emphasised that the application of Public-Private Partnerships, PPPs, with the use of tolling, provides Nigeria with an excellent strategy to improve its roads and bridges for the benefit of Nigeria’s economy, businesses and communities.Projects, he said were already progressing rapidly and that “it is essential that the policy framework is in place to support and facilitate such progress. A tolling policy will establish the enabling environment in which tolling is applied appropriately, and investors and the public can be confident in the future.“The intent of the Tolling Policy Green Paper is clear. Tolling and private investment should be used to achieve substantial improvements to Nigerian roads and bridges. The Green Paper objective is to improve the proposed policy, and the Federal Ministry of Works looks forward to constructive engagement, feedback and comments from all stakeholders,” he said.