Event blogger, Helen Ozor, has narrated her encounter with actress Iyabo Ojo when she met her at an event and tried to have an interview with her. 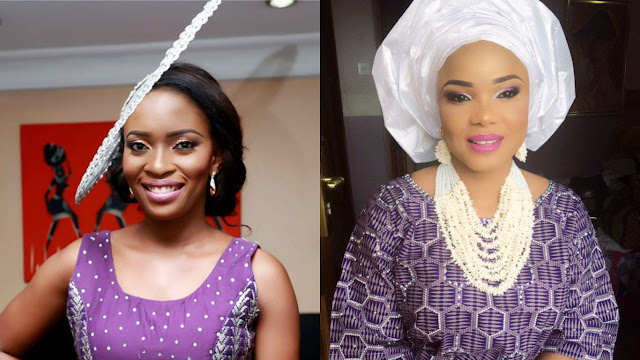 According to her, the actress looked at her, collected her notepad, went through it, handed it back to her and turned her face away. She also revealed she explained what a blog is to Iyabo in 2011. Read below…

“MY ENCOUNTER WITH NOLLYWOOD ACTRESS IYABO OJO AT A WEDDING – EVENT BLOGGER, HELEN OZOR
I remember getting an invite to attend Queen Ayo Balogun son’s wedding (#jjginger17) some weeks back. At that time, I had wanted to shoot the first video for my YouTube channel #partymomentswithhelen and I was so excited. After interviewing a few vendors/guests during the reception, I walked up to Nollywood actresses, Iyabo Ojo and Fathia Williams and requested for an interview. Faithia politely told me she doesn’t grant interviews at parties (I bet she would have agreed if it were Ovation TV or Goldmynetv). Anyway, I was glad she wasn’t rude to me. Meanwhile, it was my second time talking to her; First time was at BON Awards where she allowed me take a picture of her at the event and I had just started blogging then. Iyabo Ojo on the other hand, looked at me, collected my branded jotter where I had written my interview questions, she went through it, handed it over to me and turned her face away. This same Iyabo Ojo that I introduced myself to as a blogger in 2011 and she said ‘pls what is a blog’ I explained what a blog is, to her. I laugh anytime I remember what happened.
Truth is, at some point in your career, some people will treat you nice while others won’t. Some will help you instantly just because they love your personality while you will chase and chase some people just to get something from them. Always remember that, It is your duty to keep pushing and never give up because you are responsible for whatever you make out of your life.” 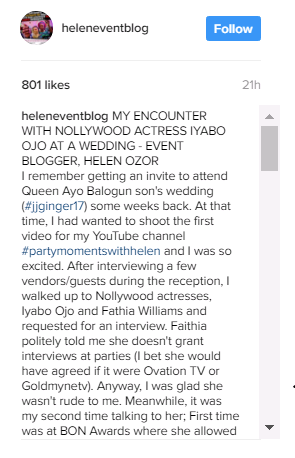 Doctor Who Jumped Inside Lagoon Was Unmarried, Family Keeps MUTE

Video: “I really missed you” – Actress, Omotola Jalade says as she reunites with Emeka Ike

“No be pride, I be Gorilla” – Singer, Burna Boy continues to brag about his Grammy Award

“When I was at the police station, the police officers took turns to beat me up” – Comedian, Macaroni

Doctor Who Jumped Inside Lagoon Was Unmarried, Family Keeps MUTE