Emirates cancels flight after snake was found in plane

Dubai-based Emirates cancelled one of its flights from Muscat, Oman, to the U.A.E. last Sunday after a snake was spotted slithering in the cargo hold.

No passengers were reportedly aboard the aircraft when the animal was spotted.

“Emirates can confirm that flight EK0863 from Muscat to Dubai on 8 January 2017, was
cancelled due to a detection of a snake in the cargo hold prior to passengers boarding.

“Engineering and cleaning teams are working to clear the aircraft to re-enter service. We apologise [sic] for the inconvenience caused.”

The carrier later confirmed the serpent was eventually captured and the plane is now back in service. Emirates has not confirmed the species of the reptile or whether the snake was venemous.

This isn’t the first time a snake spotted on a plane caused a stir.

In November, a snake was spotted slithering out from behind an overhead luggage compartment on an Aeromexico flight over Mexico. 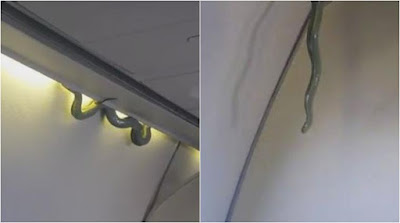 The flight was forced to make an emergency landing so animal control could quickly board the plane to collect the animal. No one was hurt during the incident.

And in October 2013, another snake was found hidden in a box of food on an EasyJet flight from Israel to Luton Airport in Bedfordshire, England.

BBNaija: “Laycon Might Get Jealous Of Us And It Will Affect The Group, Tell Him What He Wants To Hear” – Kiddwaya Tells Erica (Video)

BBNaija: “Stay Away From Erica, You Need Your Peace Of Mind” – Vee Advises Laycon (Video)

BBNaija: Erica FINALLY Opens Up On Why She Didn’t Choose Laycon As Deputy HOH | Video

BBNaija: I Am Angry And Mad – Laycon Breaks Down After Erica Dumps Him For Kidd

BBNaija: Toyin Lawani claims Nengi body shamed her when she dated her ex