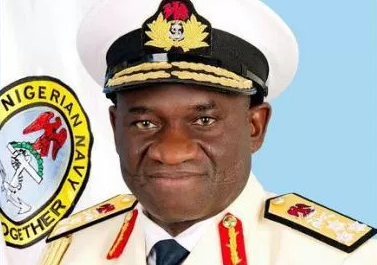 The Economic and Financial Crimes Commission, EFCC, on Tuesday arraigned a former Chief of Naval Staff, Usman Jibrin, before a court in Abuja on corruption charges.

Mr. Jibrin, a retired vice admiral, was arraigned alongside two others: Bala Mshelia and Shehu Ahmadu, both retired rear admirals.

They were arraigned before Justice A. Umar of the FCT High Court in Maitama, Abuja on a 4-count charge of criminal conspiracy.

They were docked alongside Habour Bay International Limited.

The former senior naval officers are accused of buying a house worth N600 million from the account of Naval Engineering Services. The purchase was not captured in the budget.

Instead, the documentation of transfer of ownership of the property was done such that a private
company owned by Mr. Jibrin’s family became the buyer.

The defendants pleaded not guilty when the charges were read to them.

In view of their plea, counsel to EFCC, Abdullah Faruk, asked the court for a date for commencement of trial.

Video of Naira Marley in court today as he pleads ‘Not Guilty’, to be remanded In EFCC custody until May 30