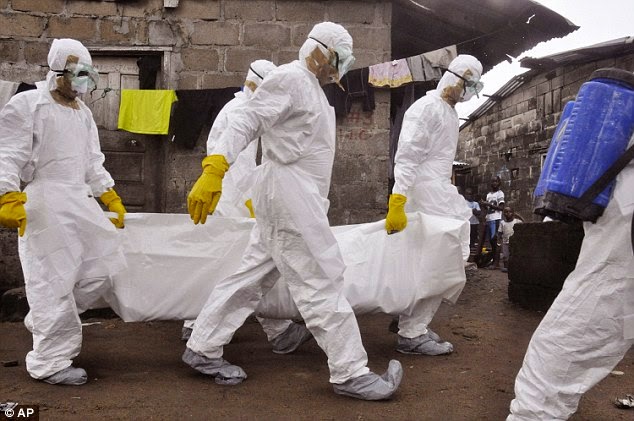 So far, Ebola is spread via contact with body fluids of a sick carrier.But, according to an article written for the New York Times by Michael Osterholm, the director of the Center for Infectious Disease Research and Policy a the University of Minnesota,there is a real risk of Ebola becoming an airborne disease.
In the article titled “What We’re Afraid to Say About Ebola”, he says
“The second possibility is one that virologists are loath to discuss openly but are definitely considering in private: that an Ebola virus could mutate to become transmissible through the air……You can now get Ebola only through direct contact with bodily fluids. But viruses like Ebola are notoriously sloppy in replicating, meaning the virus entering one person may be genetically different from the virus entering the next’If certain mutations occurred, it would mean that just breathing would put one at risk of contracting Ebola…….On why they aren’t openly revealing their fears,he writes..

They don’t want to be accused of screaming “Fire!” in a crowded theater – as I’m sure some will accuse me of doing.’But the risk is real, and until we consider it, the world will not be prepared to do what is necessary to end the epidemicOn what needs to be done…

Finally, we have to remember that Ebola isn’t West Africa’s only problem. Tens of thousands die there each year from diseases like AIDS, malaria and tuberculosis. Liberia, Sierra Leone and Guinea have among the highest maternal mortality rates in the world. Because people are now too afraid of contracting Ebola to go to the hospital, very few are getting basic medical care. In addition, many health care workers have been infected with Ebola, and more than 120 have died. Liberia has only 250 doctors left, for a population of four million.
This is about humanitarianism and self-interest. If we wait for vaccines and new drugs to arrive to end the Ebola epidemic, instead of taking major action now, we risk the disease’s reaching from West Africa to our own backyards.”
Ebola epidemic in West Africa has the potential to alter history as much as any plague has ever done.There have been more than 4,300 cases and 2,300 deaths over the past six months. Last week, the World Health Organization warned that, by early October, there may be thousands of new cases per week in Liberia, Sierra Leone, Guinea and Nigeria. What is not getting said publicly, despite briefings and discussions in the inner circles of the world’s public health agencies, is that we are in totally uncharted waters and that Mother Nature is the only force in charge of the crisis at this time.Culled from New York Times….

Obama is afraid of me, says Robert Mugabe

How Embarrassing! Nigerian U-17 National Team Barred From Entering Gabon Over Ebola

How Embarrassing! Nigerian U-17 National Team Barred From Entering Gabon Over Ebola