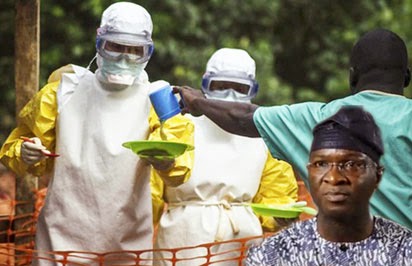 Despite the Federal Government’s insistence on September 22 resumption date for schools, indications emerged yesterday, that Lagos State Government might not respect the date.Governor Babatunde Fashola gave this hint when he received the Country Representative of the World Health Organization, Mr. Rui Van Gaz who paid him a courtesy visit in his office.According to him,” The state government is in the process of ascertaining through scientific risk evaluation, whether it will accept the date announced by the Federal Government.”He added that if evaluation showed that children would be at risk on resumption, Lagos schools would not open on September 22.At the time of this report, members of the State Executive Council, SEC, and other stakeholders’ especially private schools operators, were still locked in the crucial meeting.Earlier, Mr. Van Gaz, said the entire leadership of WHO commended Governor Fashola and his team for their efforts at containing of Ebola virus.He urged the state government to avoid being complacent due to the apparent drop in the number of Ebola cases, saying the war had not been won until the virus was entirely wiped out.According to him, “On schools resumption, we need to ensure that the schools are fully prepared in terms of availability of water, soaps and sanitizers. The teachers must be fully aware of what needed to be done when they are faced with any suspected case of Ebola Virus Disease, EVD in their school. The students must be enlightened about the symptoms of the deadly disease.“Even though the number of Ebola cases has reduced and most of the contacts are out of the 21-day quarantine, we should avoid any complacency. Until the last case is over and surveillance completed, we should not relent in the effort at tackling the disease. We need to learn from this experience by not only dealing with the disease but to strengthen the entire health system in the country.”In another development, the new state Police Commissioner, Mr. Kayode Aderanti yesterday called on the state government and other stakeholders to team up with the Police to ensure protection of lives and property.Aderanti who spoke after a closed-door meeting with governor, Fashola, however vowed to end gang wars and other security challenges in the state.According to him, “I want to move the Police forward and I want it to be community-based. I want to break the barrier between the Police and the public. I intend to reach out to the stakeholders in security. I want this state to be one of the best in terms of security. I know that this is the commercial nerve centre of the country, with a lot of private based industry. I have assured the governor that I will do more to ensure that the state is safe always. I know that there is a nexus between the level of crime and foreign direct investment in every part of the country.”

SammyFlowwz (TMH) – Be My Lover