Donald Trump VS Snoop Dogg: T.I supports Snoop and attacks the US president 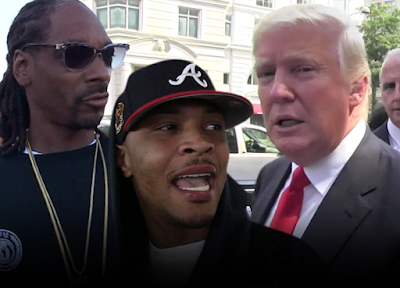 “You F***ing Tangerine Tanned Muskrat scrotum skin, Lacefront Possum fur Wig wearing, Alternative fact, Atomic Dog diarrhea face ass man!!!!” That’s the firrst part of T.I attack on Donald Trump in defence of Snoop Dogg.
Incase you haven’t been following, here’s a quick summary. Snoop Dogg mocked Donald Trump in a politically-charged music video for his new song where the US president was ridiculed as Donald Klump and painted as a clown In the video, Snoop made a mock assassination attempt at the US president. He had ‘Klump’ painted as a clown, points a gun at him, shoots the gun, but instead of a bullet, it only shoots out a small ‘Bang’ flag.
President Trump was, of course not amused by the video and took to twitter to clap back saying Snoop has a ‘failing career’ and compared what Snoop did to him to the outrage that it would have caused if the same had been done to former President Obama.
Well, now T.I has jumped in defense of Snoop Dogg saying he’s a legend and Trump shouldn’t disrespect him.
Read the rest of T.I’s rant below… 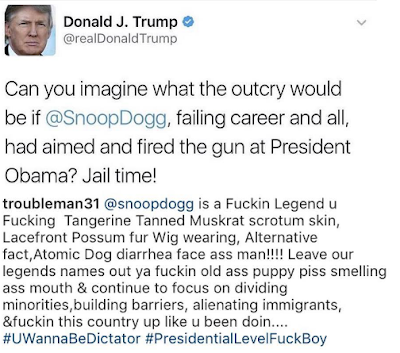 Taaooma reacts to allegations by filmmaker over N1.5 million skit